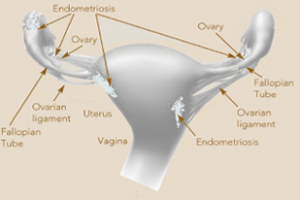 Endometriosis is a disorder in which the endometrial tissue, or the inner lining of the uterus, migrates to areas outside the uterus, most commonly the ovaries and Fallopian tubes.  The endometrial tissue is the same tissue that thickens throughout the menstrual cycle and sheds (bleeds) causing the menstrual period.  When this process occurs outside the uterus, the blood has nowhere to go causing pain in the pelvic region and sometimes cysts or adhesions.

The symptoms of endometriosis include pelvic pain, heavy menstrual periods, bleeding between periods and infertility.  Because many other conditions can cause these symptoms, endometriosis is often difficult to diagnose.  The causes of endometriosis are uncertain, but it does tend to run in families, and having children likely reduces the risk of endometriosis.  Treatment for endometriosis ranges from symptom management with pain medication and hormone therapy such as oral contraceptives to surgical treatment.  Conservative surgery involves removing the misplaced endometrial tissue while preserving the uterus.  In severe cases and in cases where women are not hoping to reproduce in the future, a hysterectomy may be performed.  Endometriosis is not the same as endometrial cancer, which is cancer of the uterine lining, although the two conditions do share many similar symptoms, often allowing for early detection of endometrial cancer.

Resources at Northwestern for Treatment of Endometriosis:

To request a first-time appointment, call 1-877-926-4664 or go online at http://ww2.nmh.org/contact/request_appointment/new_patient

Research at Northwestern in Endometriosis:

The Department of Obstetrics and Gynecology at the Feinberg School of Medicine is comprised of eleven different divisions pertaining to women’s obstetric and gynecological health.  The department has several full-time research faculty whose research projects focus on an array of disorders including endometriosis, gynecological cancers, HIV, and maternal-fetal health.  With over 50 current research projects and 4 active clinical trials, the department is a dynamic leader in women’s gynecological research.

For more information on clinical trials through the Department of OB/Gyn, see their website at http://www.feinberg.northwestern.edu/obgyn/research/clinical-trials/

Serdar E. Bulun, MD is the Director of the Division of Reproductive Biology Research and Professor in the Department of Obstetrics and Gynecology at Northwestern’s Feinberg School of Medicine.   Dr. Bulun’s translational research interests are focused on estrogen biosynthesis and metabolism in diseases such as breast cancer, uterine fibroids, and endometriosis.  Specifically Dr. Bulun has studied aromatase expression in these hormone-related diseases and is responsible for the introduction of aromatase inhibitors as a treatment for endometriosis.  His translational research in endometriosis and fibroids has made a significant contribution both to the body of research in obstetric and gynecological disorders and to the health of millions of women suffering from these conditions.  Since his seminal paper in 1996, more than 300 articles have been published in the area of aromatase and endometriosis; this exceptional achievement earned him a NIH-MERIT award in 2010.  His current focus in endometriosis research is on retinoid production and action.  Dr. Bulun is a member of the American Society for Clinical Investigation, the American Gynecological and Obstetrical Society, and the Society for Gynecologic Investigation and has served on the editorial boards of several prestigious journals including the Endocrine Reviews and is the U.S. Editor for the Journal of Molecular Endocrinology.