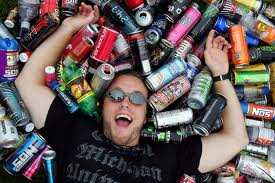 A new report from the US government released today warns that energy drinks are sending an alarming number of people to emergency rooms.

In 2009, US emergency rooms treated almost 10 times more cases of reactions to beverages such as Monster, Red Bull, and Rockstar than they did in 2005, according to a report from the US Substance Abuse and Mental Health Services Administration (SAMHSA).

More than 13,000 people visited hospital emergency rooms in 2009 due to highly caffeinated beverages, and nearly half the emergencies resulted from mixing energy drinks with alcohol or other drugs. The report notes that the vast majority (77 percent) of these visits were made by people ages 18 to 39 and that males made up 64 percent of all the visits.

“A lot of attention has been paid to energy drinks that have alcohol in them and everybody understands that the effect of that can be pretty serious,” said lead author Albert Woodward, project director of SAMHSA’s Drug Abuse Warning Network, “but energy drinks by themselves can have adverse effects.”

Meanwhile, experts urge fans of energy beverages to be aware of the caffeine content in the products to avoid overdoing it: for example, an 8.4 ounce (250 mL) can of Red Bull contains 76-80 milligrams of caffeine, according to the Mayo Clinic. An 8 ounce (240 mL) cup of brewed coffee can contain between 95 to 200 milligrams of caffeine.

In a study announced earlier this year, researchers discovered that energy drinks mixed with alcohol contribute to higher impulsivity and stimulation in the drinker, which they say can correlate with riskier behavior. Results of the new study were published in the July 2011 issue of the journal Alcoholism: Clinical & Experimental Research.

I drink one to two red bulls a day (average) I know they affect my health and if I drink them too late in the day they destroy my nights sleep. I DO NOT want my kids drinking this stuff for many years.On the same note I am an adult and should have the choice to drink anything I choose.
These energy drinks needs to have more research and test on what it does to your health. It's sad why the Food and Drug Administrators never do any in-depth research before they are marketed. It's good information is finally coming out on these.
Hi i want to say a big thank you for your energy drink article. I consume alot of energy drinks and now plan to cut down. Thanks Michelle
Obviously all of these energy drinks on the market are not good for your health. There is nothing natural in them and all those chemicals that give a temporary boost in energy just add to the overall toxins in the body. What happened to drinking the good old coffee or black tea?.... both have caffeine that gets the job done!
it's true because, recently I met a patient who was hospitalized because of her habit of rarely drinking water
I totally agree with you. Too much energy drink is really bad for our health.
Yes it's true these energy drinks can provide many negative effects. The problem is people tend to consume them just like soda pop, sometimes up to a few cans a day. When you combine this with coffee and other caffeine products it's no wonder people are being sent to the hospitals.
The new energy drinks are becoming to replenish or replace electriltes to the body in most sports minded people these days. To me these energy drinks I think do more harm than good to the body.
I'm not really fond of energy drinks. Mineral water would be just fine in my opinion. It is natural, fresh, and healthy. Our daily food has enough minerals and vitamins, we don't need them in energy drinks.
I have a friend who suffered some kind of sickness after drinking the energy drinks. Now I need to tell my son to stop buying this drink.
Some energy drinks can cause acne on your skin. So it's very important to know this problem. Thanks for the article.
I can't tell you how many times I have turned to energy drinks to stay awake and get a little pep in my step. Even after knowing the potential cost, I'll probably still continue to use....Sounds like I'm a junkie haha
very nice information....!! I think back to consuming energy drinks .... n i'll want share this information to my frends... thanks for information....
Blogs that are related to heath problems is really helpful and this blog is one of those health related blogs that I admire. Actually no such energy drinks can give good effects to our body because they're made up of chemicals.
Wow that is a lot of people. I have a friend who drinks 4 or energy drinks a day. Hope he doesn't end like them.
Energy drinks are very popular these days. I think they are great in times of really needing a boost when over tired. But I would only use them in times of real need rather than getting a habit from them as they are addictive!
I personally think caffeine is used in too many products nowadays at the end of the day it is a very powerful stimulant. most bodybuilding supplements are packed with it and weight loss products. I know at certain dosages it can prove to be fatal.