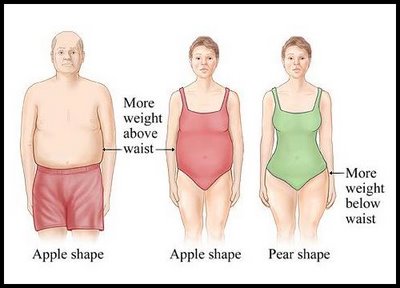 CHICAGO --- The more an older woman weighs, the worse her memory, according to new research from Northwestern Medicine. The effect is more pronounced in women who carry excess weight around their hips, known as pear shapes, than women who carry it around their waists, called apple shapes.  The study of 8,745 cognitively normal, post-menopausal women ages 65 to 79 from the Women's Health Initiative hormone trials is the first in the United States to link obesity to poorer memory and brain function in women and to identify the body-shape connection.

"The message is obesity and a higher Body Mass Index (BMI) are not good for your cognition and your memory," said lead author Diana Kerwin M.D., an assistant professor of medicine and a physician at Northwestern Medicine. "While the women's scores were still in the normal range, the added weight definitely had a detrimental effect."

For every one-point increase in a woman's BMI, her memory score dropped by one point. The women were scored on a 100-point memory test, called the Modified Mini-Mental Status Examination. The study controlled for such variables as diabetes, heart disease and stroke.   The study will be published July 14 in the Journal of the American Geriatric Society.

The reason pear-shaped women experienced more memory and brain function deterioration than apple-shaped women is likely related to the type of fat deposited around the hips versus the waist. "Obesity is bad, but its effects are worse depending on where the fat is located," Kerwin said.

Cytokines, hormones released by the predominant kind of fat in the body that can cause inflammation, likely affect cognition, Kerwin said. Scientists already know different kinds of fat release different cytokines and have different effects on insulin resistance, lipids and blood pressure.

"We need to find out if one kind of fat is more detrimental than the other, and how it affects brain function," she said. "The fat may contribute to the formation of plaques associated with Alzheimer's disease or a restricted blood flow to the brain."    In the meantime, the new findings provide guidance to physicians with overweight, older female patients.

"The study tells us if we have a woman in our office, and we know from her waist-to-hip ratio that she's carrying excess fat on her hips, we might be more aggressive with weight loss," Kerwin said. "We can't change where your fat is located, but having less of it is better."

Kerwin's research is funded by the T. Franklin Williams Award from Atlantic Philanthropies and Association of Specialty Professors and the Wisconsin Women's Health Foundation Faculty Scholar Award. The Women's Health Initiative was funded by a grant from the National Heart, Lung and Blood Institute.

Is it true that excessively overweight women have a high chance of memory loss down the road?
Did the study look at women that were overweight verses those that were not overweight? If so the only conclusion that can be taken on those variables and cannot really deduce any conclusion on which part of the body fat was deposited.
I believe in this article.
Is there any research into the effect of weight once a person stops being obese? I mean, if someone who was previously obese reduces their weight, does that then reduce the risk of decreased mental functioning, as there would be a decrease in the suspected problem cytokines?
This seems to fall in line with the reports that "bad fats" (saturated) increase the risk for dementia and that "good fats" the polyunsaturated kind found in the Mediterranean diet may be beneficial in dementia related problems. I'll be passing this article along.
It's obviously not a good or healthy thing to carry excess weight. But I can see this study leading to some pretty lame generalizations...such as "overweight people are stupid." Studies should continue and people should strive to lead healthy lives.
Is there any similarity with men? Do older overweight men also suffer of a loss of memory?
I guess each shape has it's own risks because I once read that apple shaped women are more prone to heat attacks. It seems that fat - any way you look at it is just bad for us.
Very interesting research. Of course, being too thin can also have negative effects on the brains function. I guess, as usual, having balance wins out.
I wonder if trying to find a causal link between the kinds of fat found in certain obese women and decreased cognitive function will produce anything worthwhile. In other words, maybe looking for the causal link in the wrong place. What if it isn't the kind of fat that it is "causing" the decreased function? What if--and there is substantial evidence to suggest this--the causal link is the frame of mind which gives rise to obesity? We know that physical exercise improves cognitive function, and the lack of it decreases brain function. We also know that the ways in which we focus our mental attention on a daily basis have far-reaching impacts on brain function. It is therefore just as possible that the mental attitudes (including the objects and quality of focus)which give rise to obesity may also be at the root of decreased brain function.
It is not new that over-weight cause decline in mental functions, but what is new to me that even pear- or apple-shaped women can lead to poor brain function. This means that I should start working out as soon as possible... well maybe I'll start tomorrow... i'm a little tired today...:)
I think that the function of memory loss in obese women is not because of the obesity, it is more a function of poor nutrition and likely high blood sugar levels.
Really enjoyed this post. And from the comments, it seems to stir a lot of controversy. I believe the new breed of doctors that are looking at the brain as the cause of most of our physical problems, including diabetes, obesity, and inflammatory disease are going in the right direction. Research is making it more and more clear that we must take personal responsibility for getting accurate information on the role of fats, foods, lifestyle and toxins play in the overall health and performance of our brains.
I think its more of the bad health that is causing their memory to be poor. Having a good healthy lifestyle will make all parts of your body active and energetic. That includes our memory.
I too think that memory function has more to do with your overall health, not simply where your fat stores are. I think that the overweight women in the study obviously have a less active lifestyle, and it is this which causes the reduction in memory function.