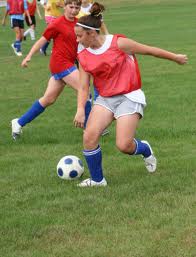 Today’s athletic high school girls “got game” on the basketball court and soccer field, but they are at a greater risk for sports-related knee injuries than their male counterparts.

“Chicago public high schools don’t have athletic trainers to evaluate injuries and advise coaches about proper warm-up techniques,” said Cynthia LaBella, MD, associate professor of pediatrics at Northwestern University Feinberg School of Medicine and medical director at the Institute for Sports Medicine at Children’s Memorial Hospital. “The athletes tend to have limited access to medical care, too, so that’s another reason why it’s so important to train these coaches and try to prevent injuries in this population.”

The key components of the warm-up are: core and lower extremity strengthening exercises (e.g., squats, lunges, planks, and prone lifts), to balance strength evenly between quadriceps and hamstrings and between right and left legs, and progressive plyometric jumping exercises, to improve neuromuscular control of knee motion during landing and cutting maneuvers.

“Verbal feedback from the coach to the athlete on how to recognize and avoid unsafe knee positions was also a big part of the intervention,” said LaBella, lead author of the study. “If you repeat an exercise with bad form, it is not going to help.”   Ninety of CPS women’s soccer and basketball coaches and nearly 1,500 female student athletes completed the study during the 2006-2007 school year. Schools were randomized into control and intervention groups.

Coaches from the intervention groups attended a two-hour training session that taught them how to implement the full warm-up at team practices and an abbreviated version before games. They also received a DVD with narrated videos of the exercises and a laminated card listing the order and frequency of the exercises. Coaches in the control group were told to perform their usual warm-up and were offered the same training as the intervention group after the study was completed.

“The findings suggest that neuromuscular training should be routine in girls’ high school soccer and basketball,” LaBella said. “And implementing it is feasible in predominantly low-income, urban populations, such as the one studied. It will take some effort on the part of coaches to learn the warm-up and incorporate it into their usual practice routines, but the reduction in injury rate is worth the effort.”

The program would be cost-effective as well. To avoid one knee injury resulting in surgery, 189 athletes would need to be exposed to the warm-up, LaBella said. That equates to training approximately 13 coaches, which would cost about $1,000, substantially less than the cost for one knee surgery, which typically costs $20,000, LaBella said.

I think it was wonderful that the researchers added the verbal reinforcement of the coaches to this study. Of course, its something that coaches should be doing as a matter of course, but sometimes its important to go back to the basics. Hopefully what they implemented is something that those schools were able to keep in place.
Yes i agree need to be warmed up before the game, especially for heavy exercise in order to avoid accidents.
It's good that they are implying these new warm up exercises to avoid injury.
Its incredible how important warm ups are to prevent injury. Has made me think...
Great article, i had similar experience. It's so important to warm up and stretch before. Work out routines and soccer practice = great result.
In the biological structure women are weaker than men but their mental state can be even beyond man's thoughts.there are some key factors for avoiding knee or other injuries and these are-: 1.WARM UP BEFORE THE GAME. 2. PROPER DIET SYSTEM 3. GUIDANCE OF THE COACH
It was an interesting post it really reminds me before engaging to the game we should have a warm up first before we proceed to physical game to prevent accidents. It should have safety first.
warm ups need to be done properly - light stretching and a quick run won't do you much good.
Nice article, I took P.E. for A level so understand about injuries in sport and what you are talking about is 100% right.
As a huge sports fan there's nothing more disappointing than injuries. To work so hard then that. Its great to do research into it.
I studied Physical education and I landed here due to our research subjects in what to relax after PE