I have noticed that recently there have been a lot of commercials on television about getting your BRACAnalysis®.  You might be wondering what a BRAC analysis is? Or maybe you are wondering if you should get one?  The BRAC test is a genetic test that will test your genome for the presence of two genes that have been correlated with certain types of breast and ovarian cancer. 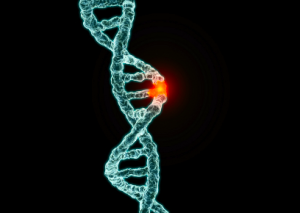 Mutations in these genes, known as BRCA1 and BRCA2, are strongly associated with 7% of breast cancers and 11-15% of ovarian cancers (1).  In most people, the BRCA genes are tumor suppressors, meaning they encode proteins that help regulate cell growth.   When these genes are mutated, they can lose their ability to control cell growth, and cancer can thus develop.  However, it is important to realize that not every woman who has a mutated BRCA1 or BRCA2 gene will develop cancer.  About 12% of the general population of women will develop breast cancer; while approximately 60% of women with a BRCA mutation will develop breast cancer.  Similarly, about 1.4% of women will develop ovarian cancer, compared to 15-40% of women with a BRCA mutation.  However, since these two genes are only associated with certain types of breast and ovarian cancer, a negative test (no mutation) does not guarantee that you will not develop cancer at some point in your lifetime (2).

Because the genes are located on the autosomal chromosomes (as opposed to the sex chromosomes), the mutation can be inherited from either your mother or your father.  Most women who decide to undergo genetic BRCA testing have a family history of breast or ovarian cancer.  However, there are no current medical guidelines for recommending BRCA tests.   Also, having a family member with the mutation does not necessarily mean you will have it to.  Once a woman tests positive for either BRCA1 or BRCA2, she has several options to help reduce her risk.  The most conservative options would be to monitor the breast and ovarian tissue with frequent screenings such as mammography or ultrasound.  More drastic options include removing the breast tissue and/or ovaries before cancer has a chance to develop, or taking chemotherapeutic drugs to help prevent cancer (clinical trials have demonstrated some success of these drugs in prevention of breast cancer).

A BRAC analysis test usually involves collection of a blood sample, and could cost you anywhere from several hundred to several thousand dollars, and it may not be covered by your insurance company.  The good news however, is that the Genetic Information Nondiscrimination Act of 2008 prevents discrimination from insurance companies or employers against people who have undergone genetic testing.  With personalized medicine on the rise, many individuals are concerned that their genetic information might be sold to employers and insurance providers and used to exclude them from employment or health coverage.  This law is meant to protect an individual’s right to privacy with his or her genetic information.

Ultimately it is your decision if you would like to undergo genetic testing.  It is important, however, to think about the emotional stress of undergoing such a test and receiving your results.  You might want to think beforehand about what you would do with the information.  If your test is positive, would you elect for preventative surgery?  Will your insurance cover early screening if you think you need it?  Knowing your risk can be both empowering and daunting.  I recently watched a wonderful documentary by filmmaker Joanna Rudnick, titled In the Family, that explores her own emotional struggle with genetic testing for breast and ovarian cancer.  View the trailer below: