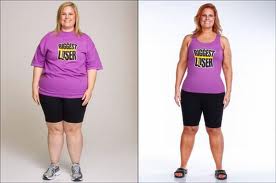 Interesting research on the outcomes of "The Biggest Loser" reality TV show highlight important news for diabetics! According to Robert Huizenga, MD , the medical advisor for the show, diabetic and prediabetic contestants were off medications within a few weeks of starting the intensive exercise regimen that are part of the intervention.    The contestants who were part of the study, averaged about 5-6 hours of TV watching a day and they were exercising about 120 minutes per week BEFORE they went on the show.   The exercise regimen while on the show comprised about 4 hours of daily exercise that included intense aerobics and resistance training for 2 hours and another 2 hours of moderate aerobics.

The study consisted of 17 men and 18 women who were followed for 24 weeks; 17 participants had normal glucose tolerance, 12 had prediabetes; 6 had diabetes.  The mean weight was 315 lbs!

Within one week biomarkers for those with prediabetes/diabetes improved significantly.   A positive change in blood pressure was almost immediately noticed and everyone was off their blood pressure medications within 5 weeks!

Interestingly, by week 5, "all diagnostic criteria for prediabetes, diabetes, and hypertension were absent in each participant, despite discontinuation of all diabetes and hypertension medications," according to the study.

Huizenga and colleagues found that at 24 weeks, the percentage of body fat decreased from 48% to 30%, which Huizenga said is "somewhat more than is lost with Roux-en-Y gastric bypass surgery."    He found that the participants tended to sit less after going through the program.

At the end of the program, participants are told to exercise for 90 minutes a day for the rest of their lives. Huizenga said he is often told by those listening to him that a daily 90-minute exercise regimen is impossible because everyone has such busy lives.  He replies,  "It's about setting priorities. Time is not the issue; priorities are the issue."

A great example of a TV show have a positive influence on the lives of individuals. When people see that something is possible they are much more likely to actually start believing it.
I love what Huizenga is saying about priorities. I hear this in my work quite often. When someone realizes that they're in control of how the look, feel and feel that's when the real changes start.
So it would seem that medication is not the answer after all. It's more about being lazy. I'm jumping up from the computer now and going for a walk. Thanks for the advice:-)
Huizenga statement about setting priority to exercise is true, not enough time or too busy is always an easy excuse to convince ourselves that it is not possible to exercise. Looking back, I gave myself the same excuse over and over again, until I really fell sick. then I started to set priority to exercise to take care of my health.