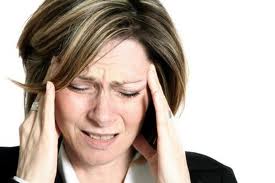 A migraine is the most common type of headache that propels patients to seek care from their doctors. Roughly 30 million Americans suffer from migraine headaches, with women affected almost three times more often than men, according to statistics from the National Headache Foundation in Chicago. Today's blog incorporates  an article by Jennifer Wider, MD of the Society for Women's Health Research.

"Hormonal changes are a big contributor to the higher female incidence,” said Michael A. Moskowitz, MD, Professor of Neurology at Harvard Medical School at the Massachusetts General Hospital in Boston. “There are lines of evidence that support this from lab to clinical evidence and a decrease (although not abolished) incidence in post-menopausal females.”

Migraine headaches can vary from person to person, but they typically last from four hours up to 72 hours. Some people get them several times per month, while others experience them much less frequently. Many migraine sufferers report throbbing or pulsating pain on one side of the head, blurred vision, sensitivity to light and sound, nausea, and vomiting.  Roughly one in five migraine sufferers experience an aura, or visual or sensory disturbance, before the onset of the headache. Examples of an aura include: flashes of light, loss of vision, zig-zag lines, pins and needles in an arm or leg, and speech and language problems.

Several risk factors have been identified that increase a person’s chance of having migraines:

Migraines are vascular headaches but the exact cause is not fully understood. Some researchers believe that migraines occur when there are abnormal changes in the brain. When these changes occur, inflammation causes blood vessels to swell and press on nerves, which can result in pain.

Unfortunately, migraines have no known cure, but they can be managed effectively with the help of a health care provider. A variety of drugs can be used for pain relief and for prevention. Lifestyle changes are often recommended to identify and eliminate possible triggers that can set off an attack.

“Until recently there have been no treatments available to treat people who suffer from chronic migraines,” said Moskowitz. However, she does mention that BOTOX has been helpful in some cases as was discussed in one of our earlier blogs. Chronic migraine sufferers have also found relief in certain vitamins and other homeopathic remedies. But patients should check with their doctors for proper treatment protocols.
Jennifer Wider, MD
SWHR, Contributing Writer