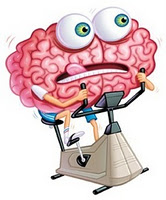 “Estrogen has a profound effect on metabolism,” said Dr. Deborah Clegg, associate professor of internal medicine and senior author of the study published Oct. 5 in Cell Metabolism. “We hadn’t previously thought of sex hormones as being critical regulators of food intake and body weight.”

The mouse study is the first to show that estrogen, acting through two hypothalamic neural centers in the brain, keeps female body weight in check by regulating hunger and energy expenditure. Female mice lacking estrogen receptor alpha – a molecule that sends estrogen signals to neurons – in those parts of the brain became obese and developed related diseases, such as diabetes and heart disease.

The findings are potentially important for millions of postmenopausal women, many of whom have decided against hormonal replacement therapy. The study could lead to new hormonal replacement therapies in which estrogen is delivered to specific parts of the brain that regulate body weight, thereby avoiding the risks associated with full-body estrogen delivery, such as breast cancer and stroke.

Doctors stopped routinely recommending long-term estrogen therapy for menopausal women in 2002 when a Women’s Health Initiative study showed the hormone did not prevent heart disease in women who already were at increased risk.

I think my comment earlier was deleted cause I didn't see it. No one has found a cure for obesety that is based on a pharmaceutical pill. The real cure so far has been eating healthy and exercise regularly.
Estrogen can actually helps regulate weight loss which is great. I would like to see people live healthy and happy lives without all this weight concerns all the time.
I just want to get this baggage out of my waist! They say if you have wide waist the more problem you can get in the future. Help me metabolize what I eat please.