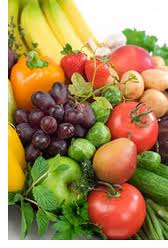 Fruits and vegetables are an important part of a healthy diet.  Your local markets carry an amazing variety of fresh fruits and vegetables that are both nutritious and delicious.  Previous blogs on this site have discussed ways to reduce your risks due to agricultural toxins in pesticides.  As you enjoy fresh produce, it is also  important to handle these products safely in order to reduce the risks of foodborne illness.

Federal health officials estimate that nearly 48 million people are sickened by food contaminated with harmful germs each year, and some of the causes might surprise you. Although most people know animal products must be handled carefully in the kitchen to prevent illness, many don’t realize that produce can also be the culprit in outbreaks of foodborne illness. In recent years, the United States has had several large outbreaks of illness caused by contaminated fruits and vegetables—including spinach, tomatoes, and lettuce.

Glenda Lewis, an expert on foodborne illness with the Food and Drug Administration, says fresh produce can become contaminated in many ways. During the growing phase, fruits and veggies may be contaminated by animals, harmful substances in the soil or water, and poor hygiene among workers. After produce is harvested, it passes through many hands, increasing the contamination risk. Contamination can even occur after the produce has been purchased, during food preparation, or through inadequate storage.

FDA says to choose produce that isn’t bruised or damaged, and make sure that pre-cut items—such as bags of lettuce or watermelon slices—are either refrigerated or on ice both in the store and at home. In addition, follow these recommendations:

I am happy to find this, thanks for sharing it here. Nice work. May God bless you :-)
Thanks for the reminder. For some reason I have a hard time remembering to wash oranges and things like that before I cut into it. I'm still kickin' though!
Most people focus on fitness workouts to improve their health, but forget the basics: washing their hands and the vegetables they eat. Doing this two simple things can save you a lot of trouble (with your stomach) and makes your life much healthier.
Just wondering, you wrote to cut out the bruised parts of the fruits. Is it bad for you to eat bruised parts of fruits, like bananas or apples?
Rolie asked if it mattered if you wash organically raised fruits and vegetables. I grow my own fruit and vegetables organically and other than when I cannot resist the temptation to pick something and eat it out in the garden or orchard on the spot, I always wash my harvest. Just because an item is organic, doesn't mean that it's "clean".
Great article,thanks
When it comes to buying fruits and vegetables, I like to buy organic when it comes to food which is found to have the highest amount of pesticide residue. Produce like apples, celery and strawberries have the highest amount of pesticides. If you don't buy organic food, you are safer with produce like onions, corn and pineapples; they have the least amount of pesticide residue traces. Buy organic whenever possible. A recent study by the USADA found 98% of apples had some type of residue, even after washing in water for ten seconds.
It's All about VegetableFruitDiet! Eating greens, vegetables And Fruit, they are all good for you in a lot of ways! I will tell you only one thing, ALL the fruit &amp; vegetables that you buy in a super market store are picked green. By this I mean that the vegetable are picked before the are ready; (Fruits picked green so as not rotten before they reach the store shelves.) &amp; (Vegetables are also picked before they are ready so as to LOOK good on the store shelf.) Pick a Red Delicious Apple, rip from the tree, and eat it. How many Red Delicious Apples do you think it would take, if you were to go to your local store and get the apples, Just How many would you need to equal the nutrition of that one rip apple? Answer: Approximately 27 Explain: (As they ripen on the vine or tree) From green to rip is when the Vegetables &amp; Fruit get all or most of their nutritional value!
Thanks for this great article about remainding us the importance of washing our fruits and vegetables. In most cases, we forget to wash, because we believe the supermarkets have done it. I also tend to clean my chopping board after each fruit or vegetable cut.
I have found if you eat fruits and vegetable that have ripened on the vine, your apatite is reduced and you will lose weight if you need to.
Does it matter if the food is organically grown locally when it comes to cleaning it, compared to store bought food? Just wondering if there is anything different when it comes to chemicals on the fruit? EDITOR'S NOTE: I don't know? Do any our our readers know? Maybe we should just be sure to wash all our produce. Since there have been a lot of recalls on prepackaged salads, I'd suggest everyone wash those too, though they say they are washed!
Good article. I've been looking for a vegetable brush and haven't found one anywhere. Do they still make them? I remember using them as a kid. They worked great.
really good information thank you but I want more information for cleaning food?
Your post about cleaning fruits and veggies brought back distant memories of my childhood. I recall now how adamant my grandmother was about cleaning the fruits and veggies before eating or cooking them. She also was a stickler for having clean hands, but that's another story! I guess the message here is to wash everything that goes into or comes in contact with our mouths. Better safe than sorry.
fruits and veggies are good, but are there any tips out there on how to clean chicken or other meats?
It's crazy some of the chemicals they use on fruits and veggies. I always use a good produce wash cleaner on my veggies and fruits before eating. Good idea to avoid any problems.