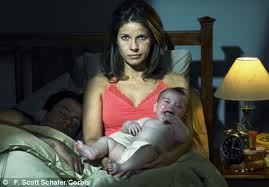 Working mothers are two-and-a-half times as likely as working fathers to interrupt their sleep to take care of others.

That is the finding of a University of Michigan study providing the first known nationally representative data documenting substantial gender differences in getting up at night, mainly with babies and small children. And women are not only more likely to get up at night to care for others, their sleep interruptions last longer—an average of 44 minutes for women, compared to about 30 minutes for men.

"Interrupted sleep is a burden borne disproportionately by women," said sociologist Sarah Burgard, a researcher at the U-M Institute for Social Research (ISR). "And this burden may not only affect the health and well-being of women, but also contribute to continuing gender inequality in earnings and career advancement."

For the study, Burgard analyzed time-diary data from approximately 20,000 working parents from 2003 to 2007, drawn from the U.S. Census Bureau's American Time Use Survey.  The gender gap in sleep interruptions was greatest during the prime childbearing and child-rearing years of the twenties and thirties, she found.

"What is really surprising," Burgard said, "is that gender differences in night-time caregiving remain even after adjusting for the employment status, income and education levels of each parent. Among parents of infants who are the sole breadwinner in a couple, for example, 28 percent of women who are the sole breadwinner report getting up at night to take care of their children, compared to just 4 percent of men who are the only earner in the couple."

In related research, Burgard and colleagues found that women get slightly more sleep compared to men. But getting about 15 minutes more total sleep a day may or may not compensate for the greater sleep interruptions women face.

"Women face greater fragmentation and lower quality of sleep at a crucial stage in their careers," Burgard said. "The prime childbearing years are also the time when earnings trajectories are being established, and career advancement opportunities could well be foregone if women reduce their paid work time or see their workplace performance affected because of exhaustion. As a result, sleep interruption may represent an under-recognized 'motherhood penalty' that influences life chances and well-being."

The findings also have implications for public health interventions to improve sleep. "Generally, these interventions target individual behaviors, such as the use of alcohol, caffeine or tobacco," said Burgard. "Or they focus on nightly routines that help people to relax and fall asleep or stay asleep more successfully.

"But for parents of young children, the best approach might be discussions and negotiations about whose turn it is to get up with the baby tonight."The study, forthcoming in the peer-reviewed journal Social Forces, was funded by the National Institute of Child Health and Human Development, the National Institute on Aging, and the Sloan Foundation.

My youngest is now two and I find that I fall asleep easily but I do wake up at night even when I'm away from home, a pattern I never had before. I wonder to what degree I'm "trained" to have a more fitful sleep. Surely this too shall pass.
It seems this study fails to consider the biological reasons why women may be more likely to wake than their husbands, and the fact that many of the women in question may be waking to breastfeed their babies - something men cannot do. I'm sure there's a combo of biological and social factors involved. I wonder if the study considered whether the difference in night caregiving was an issue in the relationship or affected their ability to perform at work.
Don't forgot, women are also more patient, long-suffering, caring, compassionate and will walk over hot coals for their children. However, most women I know, don't expect the husbands to stand-up and have an equal partnership in raising children. This is unfortunately the culture in which American's have come from, but I think it is moving more towards an equal role in raising children.
All this fits with my experience of how men are better able to sleep through the night. I am often concerned how this lack of sleep effects women.
“Women face greater fragmentation and lower quality of sleep at a crucial stage in their careers,” - this is really an UNDER-RECOGNIZED fact
This is a very interesting article. I have to disagree, though, with the above comment. Of course women who are "stay-at-home-moms" will spend more time taking care of children. The only reason America is moving more towards an "equal role" is because a larger percentage of women are working full time jobs forcing men to step up and help out more. And like the other comment said, women are sometimes just more capable of helping the child through breast feeding, etc. Thanks for the interesting read!
I wonder if the study considered whether the difference in night caregiving was an issue in the relationship or affected their ability to perform at work.
As a professional counselor, I am so glad that I've found this great blog article. The insight provided here actually adds to the arsenal of marriage-saving tools and strategies. Counselor's can help new families by coaching them to monitor, reduce and equalize the new mother's sleep interruptions. I think husbands need to learn about and actively share in these sleep disruptions, as yet another way of supporting their wives. Gratefully, - Duddy.
I must admit that I am guilty of being a bit lazy when it came to waking up to go to our children! My wife did do most of it! So I can corroborate the main points in this article. Good work!
As society changes, so do the demands and expectations within a relationship. Decades ago the maternal instinct would not have questioned the required response, today however, the working mother needs the love and support of a partner or husband.