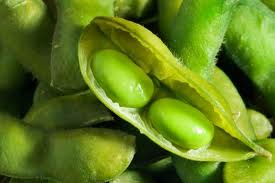 As an Institute that promotes sex and gender research, here is another blog of particular interest to the male side of the equation!

CHICAGO --- Northwestern Medicine researchers at the Robert H. Lurie Comprehensive Cancer Center of Northwestern University have found that a new, nontoxic drug made from a chemical in soy could prevent the movement of cancer cells from the prostate to the rest of the body.

Genistein, a natural chemical found in soy, is being used in the lab of Raymond Bergan, M.D., the director of experimental therapeutics at the Lurie Cancer Center, to inhibit prostate cancer cells from becoming metastatic and spreading to other parts of the body. So far the cancer therapy drug has worked in preclinical animal studies and now shows benefits in humans with prostate cancer.

A recent phase II randomized study of 38 men with localized prostate cancer found that genistein, when given once a day as a pill, one month prior to surgery, had beneficial effects on prostate cancer cells.

“The first step is to see if the drug has the effect that you want on the cells and the prostate, and the answer is ‘yes, it does,’” said Bergan, a professor of hematology and oncology at Northwestern University Feinberg School of Medicine and a physician at Northwestern Memorial Hospital.

The next step is to conduct another phase II study to see if the drug can stop the cancer cells from moving out of the prostate and into the rest of the body, Bergan said. If confirmed, Bergan said this could be the first therapy for any cancer that is non-toxic and targets and inhibits cancer cell movement.

“All therapies designed to stop cancer cell movement that have been tested to date in humans have basically failed have because they have been ineffective or toxic,” Bergan said. “If this drug can effectively stop prostate cancer from moving in the body, theoretically, a similar therapy could have the same effect on the cells of other cancers.”

Recently Dr. Oz had a program in which he discussed with some expert the value of soy. The guest stated that soy is a terrific food source, but there are some studies that have linked it with health problems. Oz asserted the problem was that people were eating soy that was refined rather than a natural product. What do others know about this?
An extremely interesting article! It seems that the soy bean is indeed a bit of a wonder food. Recently, the FDA announced that soy protein can help reduce coronary heart disease. They recommend 25 grams a day as part of a controlled diet to help reduce blood cholesterol levels, and therefore also the risk of heart disease. Now it's been found that soy can also apparently help stop the spread of prostate cancer cells. It leaves you wondering what else has yet to be discovered about the humble soy bean!
My Mother was recently diagnosed with Alzheimer's, and the information you provide is a great help. Thankyou and please keep posting articles.
This is great information on the benefits of soy. Fortunately, there are more ways you can consume soy now that it has become more well known the benefits it provides. I eat mine in hummus and in salted/dried forms as snacks. Thanks for the info!
Soy is such versatile food. On top of being healthy and possibly slowing different types of cancer it is great for your heart.
This is amazing news! I hope to see more research on the health benefits of soy. Aside from the odd study, there seems to still be a lot of confusion over the benefits of this hardy plant.
Nicely written article, unfortunately, soy is rarely used in its truest form and is mixed with salt and many other elements. If you can tell me the best way to consume soy, without nasty additions, I'd be much obliged? Note to Sophie from blog editor: We'll look into this....do any of our readers know?