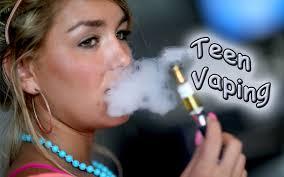 “We want parents to know that nicotine is dangerous for kids at any age, whether it’s an e-cigarette, hookah, cigarette or cigar,” said CDC Director Tom Frieden, M.D., M.P.H. “Adolescence is a critical time for brain development. Nicotine exposure at a young age may cause lasting harm to brain development, promote addiction, and lead to sustained tobacco use.”

The increases in e-cigarette and hookah use offset declines in use of more traditional products such as cigarettes and cigars. There was no decline in overall tobacco use between 2011 and 2014. Overall rates of any tobacco product use were 24.6 percent for high school students and 7.7 percent for middle school students in 2014.

“In today’s rapidly evolving tobacco marketplace, the surge in youth use of novel products like e-cigarettes forces us to confront the reality that the progress we have made in reducing youth cigarette smoking rates is being threatened,” said Mitch Zeller, J.D., director of FDA’s Center for Tobacco Products. “These staggering increases in such a short time underscore why FDA intends to regulate these additional products to protect public health.”

This report concludes that further reducing youth tobacco use and initiation is achievable through regulation of the manufacturing, distribution, and marketing of tobacco products coupled with proven strategies.  Several states have passed laws establishing a minimum age for purchase of e-cigarettes or extending smoke-free laws to include e-cigarettes, both of which could help further prevent youth use and initiation.

Fewer Parents Allowing HPV Vaccination, Despite Increased Doctor Recommendations
Posted by Sarah Henning on May 27, 2013 - 9:06am

A significant number of parents are not allowing their daughters to receive the HPV (human papilloma virus) vaccine, despite an increase in doctors recommending it. The HPV vaccine is a series of three shots given to pre-teen and teen girls and boys over the course of six months to prevent HPV and related conditions, most notably, cervical cancer in women.

Between 2008 and 2010, the percentage of doctors recommending the HPV vaccine rose from 48% to 52%. However, the CDC reports that only around one-third of eligible girls have received the HPV vaccine. In a study of parents not planning on having their daughters receive the vaccine, the percentage of those concerned about its safety increased from 5% to 16% over the course of three years. Another 17% cited the lack of necessity of the vaccine as the reason their daughters won’t receive it.

In response to concerns over the safety of the HPV vaccine, Dr. Joseph Bocchini, a pediatrician on the CDC’s Advisory Committee on Immunization Practices has stated that “we have not identified a significant likelihood of serious adverse events following vaccine” and that it “is a very safe vaccine.” Claims that the vaccine is not necessary appear weak after identifying what results from HPV. Nearly all instances of cervical cancer are caused by HPV, and many cases of vulvar and vaginal cancer are linked to it. This doesn’t mean men are exempt from HPV. 95% of anal cancers and 60% of oropharyngeal cancers (cancers in back of the throat, base of the tongue and tonsils) are caused by HPV. Vaccinating both boys and girls significantly reduces the risk of them having several forms of cancer in the future.

Increasing education efforts may help increase the rate in which children receive the HPV vaccine. Currently, there is a strong correlation between receiving a doctor’s recommendation and receiving the vaccine. However, many teens do not see a primary care provider regularly in the years they can be vaccinated. Additionally, parents may not know about the vaccine, or feel they don’t know enough about it and how it can help their children. To tackle these problems, education programs that target the general public are necessary.

For more information on the HPV vaccine, click here.