Skip to main content
Smoking implicated in half of bladder cancers in women
Posted by Sharon Green on September 1, 2011 - 7:07am

Current cigarette smokers have a higher risk of bladder cancer than previously reported, and the risk in women is now comparable to that in men, according to a study by scientists from the National Cancer Institute (NCI) . This latest study uses data from over 450,000 participants in the NIH-AARP Diet and Health Study, a questionnaire-based study that was initiated in 1995, with follow-up through the end of 2006.

While previous studies showed that only 20 to 30 percent of bladder cancer cases in women were caused by smoking, these new data indicate that smoking is responsible for about half of female bladder cancer cases – similar to the proportion found in men in current and previous studies.  The increase in the proportion of smoking-attributable bladder cancer cases among women may be a result of the increased prevalence of smoking by women, so that men and women are about equally likely to smoke, as observed in the current study and in the U.S. population overall, according to surveillance by the CDC. The majority of the earlier studies were conducted at time periods or in geographic regions where smoking was much less common among women.

The researchers found that the amount of risk brought on by smoking, called excess risk, was higher in this study than in previously reported. “Current smokers in our study had a fourfold excess risk of developing bladder cancer, compared to a threefold excess risk in previous studies. The stronger association between smoking and bladder cancer is possibly due to changes in cigarette composition or smoking habits over the years,” said study author Neal Freedman, Ph.D., in NCI’s Division of Cancer Epidemiology and Genetics (DCEG). “Incidence rates of bladder cancer in the United States have been relatively stable over the past 30 years, despite the fact that smoking rates have decreased overall. The higher risk, as compared to studies reported in the mid-to-late 1990s, may explain why bladder cancer rates haven’t declined.”

Although there have been reductions in the concentrations of tar and nicotine in cigarette smoke, there have been apparent increases in the concentrations of certain carcinogens associated with bladder cancer. A 2009 NCI/DCEG study was the first to suggest a higher risk for smoking-induced bladder cancer than previously reported.  That report, based on data from the New England Bladder Cancer Study, found that the association between cigarette smoking and risk of bladder cancer appeared to be stronger than it was in the mid-1990s. The results of the new study confirm the 2009 report.

In the current study, former smokers were twice as likely to develop bladder cancer as never smokers, and current smokers were four times more likely than those who never smoked. As with many other smoking-related cancers, smoking cessation was associated with reduced bladder cancer risk. Participants who had been smoke-free for at least 10 years had a lower incidence of bladder cancer compared to those who quit for shorter periods of time or who still smoked.

“Our findings provide additional evidence of the importance of preventing smoking initiation and promoting cessation for both men and women,” said senior author Christian Abnet, Ph.D., also from DCEG. “Although the prevalence of cigarette smoking has declined, about 20 percent of the U.S. adult population continues to smoke.”

Even though smoking carries the same risk for men and women, men are still about four times more likely to be diagnosed with bladder cancer.  These results, as well as those from previous studies, suggest that difference in smoking rates explain only part of the higher incidence rates in American men.  The researchers suggest that occupational exposures, as well as physiologic differences, may contribute to the gender disparity.

In 2011, approximately 69,250 people will be diagnosed with bladder cancer in the United States, and 14,990 will die from the disease.

The report was published on Aug. 16, 2011, in the Journal of the American Medical Association. 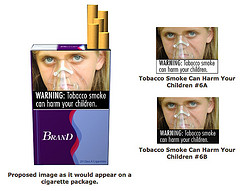 Federal regulators are testing the waters with the first proposed changes to cigarette packaging and advertisements in more than 25 years—bold health warnings with color images that show the tragic consequences of smoking.

On Nov. 10, the Food and Drug Administration (FDA) posted on the Internet 36 images showing the dangers of smoking. Federal health agencies hope the new warnings will discourage Americans from smoking by bringing them face-to-face with the cancers that plague smokers.

Under 2009’s Family Smoking Prevention and Tobacco Control Act, cigarette packages and advertisements must carry more pointed health warnings with color images after Sept. 12, 2012. FDA is beginning the process by publishing a proposal in the Federal Register that outlines new packaging and advertising requirements for cigarette makers.

FDA is asking the public to weigh-in on the images. When the public comment period ends on Jan. 9, 2011, FDA will use the comments, research results, and scientific research to pare the list to nine. The final set of images and the congressionally mandated health warnings will rotate on all cigarette packaging and in advertisements by fall 2012.

By law, the nine warnings that must appear on cigarette advertisements and packaging are:

Once in place, each warning will accompany a color image, and they’ll be splashed over 50 percent of the front and rear panels of all cigarette packages and at least 20 percent of each advertisement.

If the requirements seem tough, they’re intended to be. The Centers for Disease Control and Prevention says tobacco use is the single biggest cause of preventable death in the United States—killing more than 443,000 users and victims of secondhand smoke and causing serious illness in 8.6 million Americans.

The new warnings will be required on cigarette packages no later than Sept. 22, 2012

Where to See the Warnings and Where to Comment

All comments should be identified by Docket ID No. FDA-2010-N-0568. It is only necessary to send one set of comments. 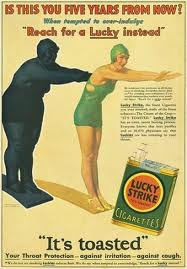 Today,more than 200 health professionals attended the Institute for Women's Health Research at Northwestern University's first educational research forum of the 2010-2011 school year that  featured Bonnie Spring, PhD, a behavioral psychologist at Northwestern.   Her lecture entitled  "Untangling the Web of Women, Smoking and Weight"  made me realize how much we still need to learn about the power of addiction.  Here are some interesting notes about smoking cessation and weight gain from her lecture:

Some promising approaches that are being evaluated include: