Skip to main content
Men to Benefit More from Healthcare Reform Expanded Coverage
Posted by Sharon Green on September 14, 2010 - 9:15am

Contrary to some commonly held beliefs, men, more than women will likely benefit more from expanded healthcare coverage.   According to the Institute for Women's Policy Research June 2010 Fact Sheet,  men represent a majority of non-elderly US adults who lack health insurance across all age groups but particularly ages 18-34.    Under age 18, boys and girls with health insurance have nearly the same coverage with many insured under public plans.   The jump begins when students leave their parents' plan at either high school or college graduation.  This will definitely improve when the Affordable Care Act of 2010 (ACA) becomes effective on September 23, 2010 and raises the age a young adult can stay on their parents' plans.

One of the reasons young women have better coverage is the fact that they have access to healthcare through Medicaid which has traditionally provided a safety net for family planning and pregnancy coverage for those with low or no income.

As we age, and reach 55 years and older, this difference is less between men and women.   Medicare coverage that generally begins at age 65 is universal and fewer than 2 % of men or women lack health insurance once they reach this age group. 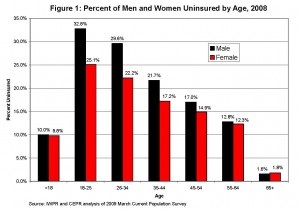 If you are interested in reading more about insurance differences between the sexes, visit the IWPR site