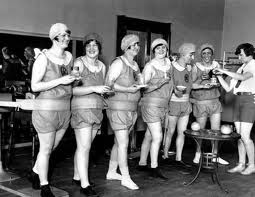 Remember those weight loss machines that consisted of a vibrating belt you put around your waist?   They were often part of a comedy routine on early TV.  Well,  they are back in the form of a whole body vibration machine.

With the new whole body vibration, you stand, sit or lie on a machine with a vibrating platform. As the machine vibrates, it transmits energy to your body, forcing your muscles to contract and relax dozens of times each second. (The old version only shook the belt)  You may feel as if you're exerting yourself when you do whole body vibration. You can find a whole body vibration machine at a local gym, or you can even buy one for home use.

One of the selling points of this machine is the belief that it may increase bone mineral density and thus help prevent osteoporosis.  But a new study does not support this hypothesis.

"Whole body vibration has been introduced in the past decade as a promising new anti-osteoporotic therapy, because significant improvements in bone formation, BMD, and cortical thickness were found in animal models," wrote the authors.   "Although commercially available WBV devices are marketed to and used by patients," they continued, "the beneficial effects of WBV on fracture risk and BMD have not been established, and recent randomized, controlled trials in postmenopausal women have shown conflicting results."

To clarify the issue, the researchers studied healthy postmenopausal women with BMD T-scores between -1.0 and -2.5 who were not prescribed bone medications. (A T-score between +1 and −1 is considered normal or healthy. A T-score between −1 and −2.5 indicates that you have low bone mass, although not low enough to be diagnosed with osteoporosis. A T-score of −2.5 or lower indicates that you have osteoporosis. The greater the negative number, the more severe the osteoporosis). Patients were randomly assigned to three groups: two groups were asked to stand on a low-magnitude WBV platform for 20 minutes daily, and the third group served as the control group.

The groups did not differ in the number of clinical fractures during the period.  None of these fractures that did occur were  related to frailty because they were caused by car, household, or sporting accidents or involved only the small bones of the foot.

"[Twelve] months of low-magnitude WBV at either 90- or 30-Hz had no effect on BMD or bone structure in healthy, community-dwelling, postmenopausal women who received calcium and vitamin D supplementation, and thus is not recommended for preventing age-related bone loss in this population," wrote the researchers.