Skip to main content
Biking and women's pelvic health
Posted by Sharon Green on August 3, 2012 - 7:05am 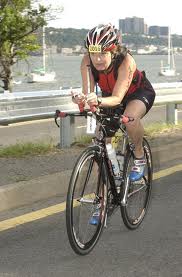 Women cyclists who set their bikes' handlebars lower than the saddle tended to show a degree of impaired genital sensation, researchers at Yale U reported.  Among 41 competitive cyclists, the 19 who rode bikes with relatively low handlebars had, on average, significantly higher vibratory thresholds in the anterior vagina, compared with riders whose handlebars were level with the bike saddle, according to Marsha K. Guess, MD, and colleagues.

Measurements of perineum saddle pressure also showed significant increases in the riders with low handlebars, Guess and colleagues reported online in the Journal of Sexual Medicine.  "Correcting modifiable risk factors for pelvic floor damage may serve as the most important next step in enhancing riding safety in women cyclists," the researchers wrote.

Genital numbness has been a recognized complaint of male as well as female cyclists.  Saddle design appears to contribute to the problem, but, the researchers noted, how the riders sit on the saddle is also a factor, and perhaps the dominant one.

An earlier study by another group had found that pressures on the pelvic floor in both sexes were related to the relative positions of the handlebars and saddles.

Consequently, Guess and colleagues reanalyzed their data from the 48-rider sample, focusing on 41 participants for whom information on their bikes was available.   Low handlebars force the rider to exaggerate their forward lean, decreasing the trunk angle and increasing the pelvic tilt. Guess and colleagues hypothesized that this position would put more weight over the perineum region relative to the ischial tuberosities (commonly called the sitz bones).

Results were reported for 22 riders whose handlebars were level with their saddles compared with the 19 with lower handlebar positioning.

They concluded that low handlebar positions "yield detrimental effects to the female pelvic floor," but they also conceded that higher positions may increase the riders' wind resistance and reduce their speed.   "This exemplifies the ongoing struggle between selecting a more aerodynamic bicycle position for control and speed or a more ergonomic position to reduce neurovascular compromise," Guess and colleagues wrote.