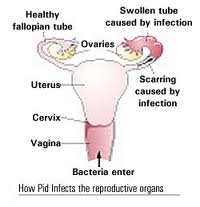 Pelvic inflammatory disease (PID) refers to infection of the uterus (womb), fallopian tubes and other reproductive organs that causes symptoms such as lower abdominal pain.   It is a serious complication of some sexually transmitted diseases, especially chlamydia and gonorrhea.   PID can damage the fallopian tubes and tissues in and near the uterus and ovaries and can lead to serious consequences including infertility, ectopic pregnancy (a pregnancy in the fallopian tube or elsewhere outside the womb), abscess formation and chronic pelvic pain.

More than 750,000 women in the US experience an episode of acute PID every year.

PID occurs when bacteria move upward from a women's vagina or cervix into her reproductive organs.   A prior episode of an PID increases the risk of another episode because the reproductive organs may be damaged during the initial bout of infection.

Sexually active women in their childbearing years are most at risk, and those under age 25 are more likely to develop PID than those older than 25.   This partly because the cervix of teenage girls and young women is not fully matured, increasing their susceptibility to the STDs that are linked to PID.   The more sex partners a women has, the greater her risk of developing PID.   Also, a woman whose partner has more than one sex partner is at greater risk of developing PID, because of the potential for more exposure to infectious agents.   Women who douche may have a higher risk of developing PID.   Research has shown that douching changes the vaginal flora in harmful ways, and can force bacteria into the upper reproductive organs.

Women who have an intrauterine device (IUD) inserted may have a slightly increased risk of PID near the time of insertion compared with women using other contraceptives or no contraceptive at all.  However, this risk is greatly reduced if a women is tested and, if necessary, treated for STDs before an IUD is inserted.

Signs and symptoms of PID include:

If the PID is caused by a chlamydial infection, a woman may only have mild symptoms or even no symptoms.   This often leads to an undiagnosed case of PID which can become a serious problem.

To read more about the causes,  diagnosis, treatment and complications of PID, click HERE.

Such an informative post on PID....The importance of educating younger women about these types of diseases that affect fertility can never be stressed enough! Your site is such a great resource for women I have even linked to it from my own blog...thanks for the great info and keep it up! Anna
Thanks for the info you provide. Your blog is very inspiring!
Does anybody know if a symptom of PID is a yellow vaginal discharge. I have had a discharge for a while now that keeps coming back. I also have a fishy musty Odor which is very unpleasant. Could this be PID
I had PID when I was about 20 yrs old. It was a very painful experience. Ahh the college years....a true learning experience!
Thanks for this informative article! People don't write about vaginas and its problem that much so it is quite difficult to find informative articles about vaginas. I hope you will write about bacterial vaginosis also. Thanks!!
STDs are a real problem, many young girls don't know how dangerous is for their fertility.