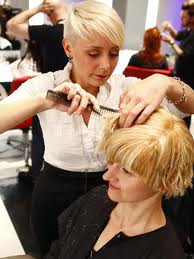 Next time you get a haircut, you might end up with a referral to a dermatologist.

A recent survey of Texas hair salons found more than a third of stylists check at least half of their customers for suspicious moles on the scalp, and most have referred people to a doctor lest the mole turn out to be skin cancer. What's more, half the hairdressers were keen to learn more about skin cancer to help extend the reach of doctors screening for the disease, according to findings in the Archives of Dermatology.

"What we would like to do in the next couple of years is to train as many hair professionals as possible," said Alan Geller, of Harvard's School of Public Health in Boston, who led the new work. "We think this holds a lot of promise."  He's not the only one hoping to spread the gospel of modern medicine through hair salons and barbershops, whose clientele might not otherwise see a health provider. There are many urban  programs that utilize barber shops and hair salons to spread preventive health messages related to breast and prostate screening,  heart disease and diabetes.

But other experts aren't convinced.   "As a rule, you should do what you're good at," said Dr. Martin Glud, a dermatologist at Bispebjerg Hospital in Copenhagen, Denmark. "If you're a hairdresser, that's cutting hair, with all due respect."    Earlier this year, Glud published a study showing that while the rates of melanoma—the deadliest form of skin cancer—have shot up recently, the disease's death toll has barely increased. That indicates that at least in some cases, the additional tumors being diagnosed wouldn't have gone on to kill the person.   "Some believe the rise in melanomas is really a sign of overdiagnosis," Glud told Reuters Health.

About one in 50 white Americans born today will get melanoma at some point during their life, according to the American Cancer Society. The group estimates that roughly 8,800 will die from the disease in 2011.   Because melanomas are so rare—particularly on the neck and scalp—and moles are very common, Glud worries that hairdressers might sound a lot of false alarms, contributing to the problem of overdiagnosis.   "It's a slippery slope," he said.

Geller acknowledged that having hair salons double as screening centers could end up taxing scarce health care resources.  "We would need to make sure that this doesn't lead to a tremendous drain for the health care system," he cautioned.  Suspicious moles are those that itch, bleed, change color or grow asymmetrically. A dermatologist may choose to biopsy such a mole and remove it if cancer is found. That can leave a scar, and may require a skin graft in the case of larger tumors.   Geller, who polled 203 hair professionals from a chain of 17 salons in the Houston area, said there is "circumstantial evidence" that screening for skin cancer saves lives. But he acknowledged there are no direct experiments to prove that point.

As a result, the U.S. Preventive Services Task Force, a federally appointed expert panel, says there is too little data to balance the harms and benefits of skin cancer screening at the doctor's office, let alone hair salons."I certainly can't support the implication of this study that we should be training hairdressers to do skin screenings," said Dr. Michael LeFevre from the task force.   But he added that doesn't mean they shouldn't point to moles their customers might not have noticed themselves. "To raise the individual's awareness that there is something there is not inappropriate," he told Reuters Health. "That is different from referring them to the doctor."

Editor's Note:   Interesting debate, but since I really never look at my scalp, I would appreciate my hairdresser---especially someone who has been cutting my hair for years---  pointing  out anything unusual!   A visit to a dermatologist to confirm any suspicious mole could result in early and a less costly diagnosis.

good posting... is i can copy this post to my blog
that is really a great idea for salons to get involve in for a cancer movement around the world. nice post guys!
Hi, hey thanks for the post, good info about this. my wifes mom is a hairdresser too :) also to help prevent skin cancer it's smart to get your windows tinted.
I think this would help people a great deal as hairdressers are the only people looking close at someones head all the time. Great Topic
Hello, very interesting article, thank you for sharing. It's a really good idea to train hair professionals about how to check their customers for suspicious moles on the scalp.
this is really a great idea for salons to get involve in a cancer movement around the world and to prevent it from spreading. nice post guys! Am copying it to my blog and i will link back
Interesting for other countries to adopt this model. I will write a blog about this issue in Swedish. Thanks!
This blog is nice and amazing. I love your post! It's also nice to see someone who does a lot of research and has a great knack for ting, which is pretty rare from bloggers these days. Thanks!
This would be a great help to the industry and all women if hair dressers were trained to spot these things. A women probably goes to the hair dresser more than the doctor! Thanks for the good write up!
Great post, Its all very well for Dr. Martin Glud to say “As a rule, you should do what you’re good at,” But i think he may be missing the point somewhat, Generally hairdressers do not claim to be anything other than hairdressers,but as they are standing there looking at your head and they see something isn't it worth to mention it? I personally would be very grateful for a hairdresser to say something,if they saw something. And I would go and have it checked out. They are being friendly and concerned people, they are not trying to be a dermatologist
cancer spotting sounds like a great idea. maybe other beauty businesses can get into cancer spotting as well.
This is a fantastic idea! This could saveso many life's. I say bring it on!
As a hairdresser it only seems right that we pay attention to our clients scalp. After all it is hard for a client to examine if in fact they already have a mole or if a new one occurs. Since we see them on a monthly or at 6 week intervals, a sudden change in a mole could save your client's life. It seems like our job as a cosmetologist. Good post!
This is a fantastic idea. I have some friends who are cosmetologists, and I wonder if they make their clients aware of this. I'll definitely ask!
I'm always wary about suspicious mole or bumps on my scalp. This article really shed some light on the issue of suspicious moles. I for one always alert my clients to it whenever I see it.