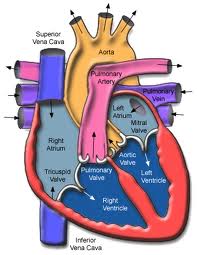 In the largest human study to date on the topic, researchers have uncovered evidence of the possible influence of human sex hormones on the structure and function of the right ventricle (RV) of the heart.

The researchers found that in women receiving hormone therapy, higher estrogen levels were associated with higher RV ejection fraction (ejection refers to the amount of blood pumped out during a contraction; fraction refers to the residue left in the ventricle after the contraction)  with each heart beat and lower RV end-systolic volume — both measures of the RV’s blood-pumping efficiency — but not in women who were not on hormone therapy, nor in men. Conversely, higher testosterone levels were associated with greater RV mass and larger volumes in men, but not in women, and DHEA, an androgen which improves survival in animal models of pulmonary hypertension, was associated with greater RV mass and volumes in women, similar to the findings with testosterone in men.

“This study highlights how little is known about the effects of sex hormones on RV function. It is critical from both research and clinical standpoints to begin to answer these questions,” said Steven Kawut, M.D., M.S.,  director of the Pulmonary Vascular Disease Program at the University of Pennsylvania School of Medicine in Philadelphia.

The study was published online ahead of the print edition of the American Thoracic Society’s American Journal of Respiratory and Critical Care Medicine.

Study participants were part of The MESA-Right Ventricle Study (or MESA-RV), an extension of the Multi-Ethnic Study of Atherosclerosis (MESA), a large, NHLBI-supported cohort focused on finding early signs of heart, lung and blood diseases before symptoms appear. Using blood samples and magnetic resonance imaging (MRI) of the heart, researchers measured sex hormones and RV structure and function in 1957 men and 1738 post-menopausal women. Because the MESA population is ethnically mixed and covers a broad age range of apparently healthy people, the results may be widely applicable to the general U.S. population.

“One of the most interesting things about this research is that we are focusing on individuals without clinical cardiovascular disease so that we may learn about determinants of RV morphology before there is frank RV dysfunction, which is an end-stage complication of many heart and lung diseases,” said Dr. Kawut. “When we study people who already have RV failure from long-standing conditions, the horse has already left the barn. We are trying to assess markers that could one day help us identify and intervene in individuals at risk for RV dysfunction before they get really sick.”

Because the RV plays a critical role in supplying blood to the lungs and the rest of the body, RV function is closely tied to clinical outcomes in many diseases where both the heart and lungs are involved, such as pulmonary hypertension, COPD and congestive heart failure. However, the RV is more difficult to study and image than the left ventricle and comparatively little is known about its structure and function and how to treat or prevent right heart failure.

Corey E. Ventetuolo, M.D., lead author of the study from  Columbia University College of Physicians and Surgeons, reported,  “Our results have generated some interesting questions about RV response to the hormonal milieu. For example, the finding that higher levels of testosterone (and DHEA) were associated with greater RV mass would first appear to have adverse clinical consequences, since increasing cardiac mass is traditionally thought to be maladaptive. However, another study from MESA-RV has shown that higher levels of physical activity are also linked to greater RV mass, which would suggest an adaptive effect. So, whether the increased RV mass seen with higher hormone levels is helpful or harmful is not yet clear. The sex-specific nature of the associations we found was unexpected and reflect the complexity of the actions of sex hormones.”

Sex hormone levels could help explain a key paradox in pulmonary arterial hypertension (PAH), where the RV response is an important determinant of survival.  While women are far more likely to develop PAH, they also have better RV function and may have a better survival than men. “It is possible that hormone balance could predispose them to developing PAH, but confer a protective benefit in terms of RV adaptation,” explained Dr. Kawut.

The ultimate goal would be strategies to treat or prevent RV failure in those at high risk.

Thanks for posting such a terrific website. this weblog was not simply knowledgeable but additionally very ingenious as well.
It is good to read how our sex hormone levels have such a broad effect.
The RV function is closely tied to diseases such as COPD and pulmonary hypertension, and then further on, "higher levels of physical activity are also linked to greater RV mass, which would suggest an adaptive effect" - this begs the association of exercise and COPD. Thanks
Hormones have an influence on many tissues and organs, including the cardio-vascular system (CVS). Depending on their activity on CVS, they can be divided into 4 groups: having hypertensive or hypotensive influence and chronotropic positive or negative action. Endocrine regulation in CVS may occur in many ways. Apart from hormones usually connected with CVS regulation, other more recently, discovered ones can act on it. A few of these act directly through specific receptors in heart or vessel wall cells, whereas some act indirectly - stimulating other neuroendocrine factors. Additionally, novel mechanisms of signal transduction have been discovered for steroid and thyroid hormones, which are independent of gene transcription regulation and are - known as "nongenomic". Hormones which increase blood pressure include: urotensin II, endothelins, angiotensin II, catecholamines, aldosterone, antidiuretic hormone, glucocorticosteroids, thyroid hormones, growth hormone and leptin. On the other hand, blood pressure can be decreased by: natriuretic peptides, the calcitonin gene-related peptide (CGRP) family, angiotensin 1-7, substance P, neurokinin A, ghrelin, Parathyroid hormone-related protein (PTHrP), oxytocin, and, sex hormones. Hormones which when appearing in excess increase the heart rate are: catecholamines, endothelins, glucocorticosteroids, thyroid hormones, leptin and PTHrP. Those which decrease the heart rate include: natriuretic peptides, substance P, neurokinin A, oxytocin, angiotensin 1-7. This paper describes the contemporary view of the functions of hormones which act on the vessel tree and heart. The particular effect of mediator depends on many circumstances i.e.: hormone concentration, receptor type. It may also undergo contraregulation. The majority of those hormones play an important role in the pathogenesis of CVS diseases', which can result in the development of new medicines