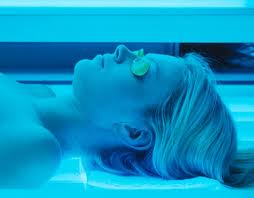 A new study points to indoor tanning as a cause for melanoma, the most serious type of skin cancer,  particularly among young sunbed users.  Overall, there was a 20% increased risk for melanoma with any indooor tanning, according to Mathieu Boniol, PhD, of the International Prevention Research institute in Lyon, France, and colleagues.   The risk nearly doubled when sunbed use began before age 35.

"Powerful ultraviolet tanning units may be 10 to 15 times stronger than the midday sunlight on the Mediterranean Sea, and repeated exposure to large amounts of ultraviolet A delivered to the skin in relatively short periods (typically 10 to 20 minutes) constitutes a new experience for humans," Boniol's group observed.

The last meta-analysis on risk of melanoma with indoor tanning was conducted in 2006. It showed an increased risk, but no dose-response could be identified.  Since that time considerably more data have been published, so Boniol and colleagues performed an updated meta-analysis that included 27 studies and 11,428 cases of melanoma from 18 countries in western and northern Europe.

In studies that considered risk according to the number of tanning sessions each year, there was a 1.8% increase in melanoma risk for each sunbed exposure.  For high use of indoor tanning, the risk increased by 42%, and when initial exposure was more than 5 years before the diagnosis of melanoma, the relative risk was 1.49.

The researchers reported that melanoma could be attributed to sunbed use in 5.4% of cases overall, and was associated with 6.9% of all melanoma cases in women and 3.7% of cases in men.

This means that in the  European countries included, about 498 women and 296 men would die each year from a melanoma as a result of being exposed to indoor tanning using artificial ultraviolet light," the researchers stated.

They also noted that it was unlikely that the increases in melanoma could be explained by greater sun exposure.

"Compelling evidence that use of sunbeds can be a cause of melanoma and not just a proxy for sun exposure arises from the investigation of a melanoma epidemic in Iceland, a country located between 64 and 66 degrees North and where sunny days are uncommon," the researchers wrote.

That epidemic began in 1990, with a sharp increase in cases among young women, but began to decline 10 years later, when Icelandic regulatory authorities cracked down on tanning facilities.

The researchers noted that some data have suggested that sunbed-related melanoma may not be as aggressive as the solar-induced malignancy, but cautioned that the overall burden of disease is likely to rise because of the continuing popularity of indoor tanning, particularly among young people.
Source reference:
Boniol M, et al "Cutaneous melanoma attributable to sunbed use: Systematic review and meta-analysis" BMJ 2012; DOI: 10.1136/bmj.e4757.

I've never felt the need to jump into one of these cancer machines. I can't believe how many health conscious individuals use these on a regular basis
I really can't understand how people fail to realize the danger in this machine. I mean, common, fake ultra light? you're lying under it for a long period of time, it's only clear that the effect will be devastated.