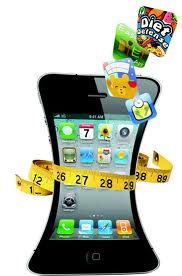 Using a mobile app that tracks eating and activity helped people lose an average of 15 pounds and keep it off for at least a year, according to a new Northwestern Medicine study.  But the technology only aided weight loss when its users also attended regular classes about nutrition and exercise. The app alone didn’t help.

“The app is important because it helps people regulate their behavior, which is really hard to do,” said Bonnie Spring, lead investigator of the study and a professor of preventive medicine at Northwestern University Feinberg School of Medicine. “Most of us have no idea how many calories we consume and how much physical activity we get. The app gives you feedback on this and helps you make smart decisions in the moment.”

“The ‘widget’ is critical but it is not magical by itself,” Spring added. “People need all the tools at their disposal.”   The study was published Dec. 10 in Archives of Internal Medicine.

This is the first study to show that technology added to an existing program of weight loss classes can produce sustained weight loss. Spring believes the weight loss app is the first proven to be effective in a published randomized clinical trial. Commercially available apps are not usually evidence based or tested for effectiveness in rigorously designed research, she noted.

In addition, the Northwestern technology is based on validated behavior change techniques including self-monitoring, goal setting, feedback and social support.

The study included 69 overweight and obese adults who were an average age of 58 and primarily men. All participants were offered health education classes on nutrition, exercise and behavior change twice monthly during the first six months and once monthly for the remainder of the year. (EDITOR'S NOTE:   We will encourage the researcher to expand the study to more women to see is there are gender differences in access to social media tools).

Each participant received weekly calorie goals based on his current weight and weekly activity goals based on his current level of activity. Participants receiving treatment as usual recorded their eating and activity on paper. Those in the experimental treatment used the mobile device to transmit their data to a behavioral coach, who monitored their information and provided scheduled telephone coaching for 10 to 15 minutes about twice monthly.

The time people spent interacting with the remote coaches was minimal.

“The coaches’ most important role was being in the wings,” Spring said. “The patients know the coaches are hovering and supportively holding them accountable. They know somebody is watching and caring and that’s what makes a difference.”

The participants, who were older, did not have prior experience with mobile phone technology and easily mastered the technology. “Some people think older people won’t use technology interventions, but that isn’t so,” Spring said.

One big challenge in treating obesity is the need to provide intensive behavioral treatment in a health care system where physicians don’t have the time and training to do it.

“This approach empowers patients to help themselves on a day-to-day basis,” Spring said. “We can help people lose meaningful amounts of weight and keep it off.  To do that we need to engage them in tracking their own eating and activity, learn how that governs weight, and take advantage of social support.”

The study was supported by grants from VA Rehabilitation Research and Development and grant HL 075451 from the National Heart, Lung, and Blood Institute of the National Institutes of Health.