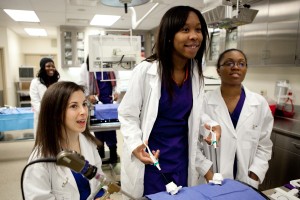 "We're delighted that President Obama recognized the impact of mentoring the next generation of female scientists and leaders and are humbled by the recognition of this award,” said Teresa Woodruff, director of the Institute for Women’s Health Research and the Thomas J. Watkins Professor of Obstetrics and Gynecology at Feinberg. “By helping women and girls we can help change the world."

The White House award recognizes the crucial role mentoring plays in the academic and personal development of students studying science and engineering—particularly those who belong to groups that are underrepresented in these fields. By offering their expertise and encouragement, mentors help prepare the next generation of scientists and engineers, while ensuring that tomorrow’s innovators reflect and benefit from the diverse talent of the United States.    “Through their commitment to education and innovation, these individuals and organizations are playing a crucial role in the development of our 21st century workforce,” President Obama said. “Our Nation owes them a debt of gratitude for helping ensure that America remains the global leader in science and engineering for years to come.”

Of the 90 students who have participated in the Women’s Health Science Program from the Young Women’s Leadership Charter School in Chicago, 18 are seniors in high school, 70 are attending college, and two have received undergraduate degrees.  Of those attending college, 51 percent are pursuing science majors.

Woodruff plans to expand the science program to other high schools in the Chicago area. The program also has grown beyond Chicago through Woodruff’s efforts.  Similar informal education programs based on the Chicago model are now running in San Diego, Portland and Philadelphia.  To learn more about the WHSP program click HERE.

Woodruff, a reproductive endocrinologist, researches female reproductive health and infertility and is chief of the division of fertility preservation at the Feinberg School. She also leads the Oncofertility Consortium , a national a team of oncologists, fertility specialists, social scientists, educators and policy makers to translate her research to the clinical care of women who will lose their fertility due to cancer treatment.  In addition, she has been an advocate for sex and gender inclusivity and study in basic science, translational studies and clinical trials.

Good Initiatives! We can change the world by helping girls. It is a nice thing that your institute is doing. We need a lot of female scientists and engineers.
Given the growth the popularity of video games, the growth in the amount of women playing them, and the increasing research suggesting the benefits of playing games in conjunction with education, I would love to see an increased role of them in various educational programs. Mentoring is a great start though!
I'm glad they have programs like this. Education is highly needed in today's work force and these young women are our future.
I love the idea of mentoring students. One on one relationships have such impact on young adults.
Technology surely has contributed a lot of things to enhance the education system, and with these amazing innovation which is the social networking site such as Facebook, Twitter and the newest, and most potentially ambitious Google+, these are tools that may help enhance, or exploit the education system without proper supervision.