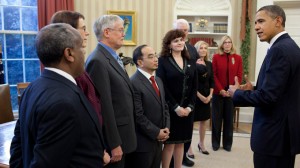 Dr. Woodruff (in the red jacket) meets with President Obama

Teresa Woodruff, Director of the Institute for Women's Health Research (creator of this blog site)  and the Thomas J. Watkins Professor of Obstetrics and Gynecology at Northwestern University Feinberg School of Medicine, received the prestigious Presidential Award for Excellence in Science, Mathematics and Engineering Mentoring at the White House from President Barack Obama Monday, Dec. 12.

The award was for an Institute program called the Women's Health Science Program for High School Girls and Beyond. The program mentors urban minority high-school girls for college and careers in science and health.

“Meeting President Obama in the Oval Office was a true honor and humbling event,” said Woodruff.   “In his remarks, the president affirmed his deep commitment to science and engineering and the role that basic science plays in the health of our nation. He made time to congratulate us on our efforts and comment on the critical role that science mentorship plays in the development of the next generation of innovators on whom we count to solve our world’s most pressing needs.”

“This award is for the hundreds of faculty, staff and students throughout Northwestern University and Northwestern Memorial Hospital who donate their time to mentorship,” Woodruff added. “Our program focuses on the next generation of female leaders. Our goal is to ensure that the future is filled with a diverse group of problem solvers ready to meet the world’s challenges.”

The Women's Health Science Program for High School Girls and Beyond (WHSP), a four-year-old program, targets primarily African American and Latina girls from disadvantaged backgrounds in Chicago. The young women can study at four different Northwestern academies: cardiology, physical science, infectious disease and oncofertility. The science program is part of the Institute for Women’s Health Research at the Feinberg School.

Carole LaBonne, an associate professor of molecular biosciences at Northwestern and faculty member in the mentoring program, emphasized the importance of increasing the representation of women and minorities in the STEM disciplines.

"The program developed by Dr. Woodruff has had amazing impact and is truly transformative,” said LaBonne, a member of Northwestern’s diversity committee. “It should be used as a model for how universities across the country can address the pipeline problem by helping to educate and excite students from underrepresented groups about science from an early age."

Of the 90 students who have participated in the Women’s Health Science Program from the Young Women’s Leadership Charter School in Chicago, 18 are seniors in high school, 70 are attending college and two have received undergraduate degrees. Of those attending college, 51 percent are pursuing science majors.

WSHP has grown beyond Chicago through Woodruff’s efforts. Similar informal education programs based on the Chicago model have been running in San Diego, Oregon and Philadelphia. Plans also are underway to expand the program to other Chicago high schools.

Congratulations Teresa on your prestigious Presidential Award for Excellence in Science, Mathematics and Engineering Mentoring at the White House!