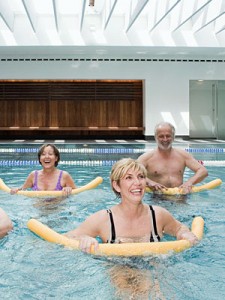 Being physically active is one of best ways people with arthritis can improve their health, but a new study from Northwestern University Feinberg School of Medicine shows that more than half of women and 40 percent of men with arthritis are virtually couch potatoes.

This is the first study to use a device to objectively measure the physical activity of people with arthritis and determine if they meet federal guidelines. Past research relied on self-reported accounts of exercise and activity.

Researchers asked more than 1000 people with radiographic knee osteoarthritis to wear an accelerometer---a small, sophisticated device that looks like a pedometer---to measure their physical activity for one week during waking hours. The participants are part of a larger national study called the Osteoarthritis Initiative and are 49 to 84 years old.

“We had assumed that people might be overstating physical activity in past self-reported data, but were surprised to find that the physical activity rates were much, much lower than what was previously reported,” said Dorothy Dunlop, associate professor of medicine at Feinberg and lead author of the study.

The federal guidelines recommend that adults with arthritis participate in 150 minutes per week of moderate-intensity, low-impact activity. That amounts to an average of slightly more than 20 minutes per day. Previous studies estimated that a quarter of people with arthritis met those guidelines.

“This study found that fewer than one in seven men and one in 12 women met those guidelines when we had this objective measure, using the accelerometer,” said Dunlop a health services researcher who also is with the Institute for Healthcare Studies at Feinberg. “The more alarming finding is that so many people actually qualified as being inactive.”

Participants were deemed inactive if they failed to sustain a 10-minute period of moderate-to-vigorous activity over the entire week of wearing the accelerometer. A substantial 40.1 percent of men and 56.5 percent of women studied were found to be inactive.

While more than half of men engaged in significantly more moderate-to-vigorous activity than women, the majority of men who didn’t fall into this category were spending their time in no to very light activity.

“The fact that so many people with arthritis are inactive should be a wake-up call to physicians,” Dunlop said.

Brisk walks and water aerobics are two recommended activities for people with arthritis, but Dunlop said patients should talk with their physician about any concerns before starting an exercise program.

“Even though they have joint disease, patients need to be reminded that physical activity is actually good for them,“ Dunlop said. “People with arthritis should be as physically active as possible, even if they accomplish less than the recommended levels. When it comes to physical activity, there is good evidence that the benefits far outweigh the risks and being inactive is especially detrimental to health.”

The study was published in Arthritis & Rheumatism, August 2011.