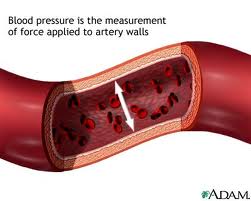 Postmenopausal women have an increased risk of hypertension (high blood pressure), and among older adults, more women than men have hypertension.   As with many other health issues, hypertension research has been conducted predominately in males, and little is known about how women's bodies manage blood flow.   Research conducted by Heidi A. Kluess at the University of Arkansas is focusing on a  better understanding of hypertension in women by using a new technique to examine the release of a neurotransmitter in small blood vessels.

Kluess, an exercise scientist, believes the answer seems to be in the "synapse".  The synapse is the space between the nerve and the vascular smooth muscle, the place where the nerve and blood vessel interact.   A neurotransmitter crosses the "synapse" to activate a receptor, which then causes the artery to constrict.   "There's been a little evidence to say that some of the neurotransmitter breakdown is different in women.   It suggests that when we've been looking at receptors on the smooth muscle, we may have been missing a big part of the story, particularly in women," Kluess said.

The team measured the neurotransmitter adenosine triphosphate (ATP) coming from the small blood vessels (arterioles).  ATP plays a key role in controlling blood flow and blood pressure by causing the diameter of blood vessels to change.   Thus, the constriction of veins associated with hypertension could be related to relatively high levels of ATP in arterioles. So this raises the questions:   Where is the ATP coming from, what tissues are releasing it and how does this change with aging?

To study this,the researchers had to overcome the difficulty of working with very small blood vessels that produced minute amounts of ATP.   A biosensor that was only previously used in brain researcher was utilized that uses a set of enzymes to indirectly measure ATP as it is released.

The research findings suggest that ATP from small arterioles can be measured and that the arteriole wall plays an important role in release and management of ATP. The researchers found that ATP is released mostly from the sympathetic nerves in the arteriole wall and that only a small part comes from the smooth muscle. Considerable research suggests that having a lot of ATP floating around in the blood vessels is not a good thing. The upside of this finding is that the nerve releases ATP in response to nerve signals. However, the mechanisms involved in the release of ATP by smooth muscles are less well understood, Kluess explained, and may result in chronically high ATP release.

The researchers found that the ATP overflow varied considerably with age. Because ATP is associated with vascular growth, it is important during early development when blood vessels are growing, but levels generally decline when people reach their twenties. Elevated levels can be a bad sign during aging when the body is no longer growing and may be a predictor of vascular changes that can be detected years before hypertension is a problem.

Some previous research had suggested that the endothelium – the outer layer of the smooth muscle – produced ATP. However, Kluess’ research showed that the endothelial tissue did not produce ATP. Rather, it decreased levels of ATP and potentially plays a positive role in controlling ATP levels.

More research is needed to investigate the factors that control ATP overflow and metabolism to reveal the mechanisms associated with age-related change. “We are very much at the beginning of this story,” Kluess said.

Tai Chi is a great way to release tension (male or female). Its calming, opens up the joints and gently stretch the muscles. Its not often promoted by the mainstream medical profession, but it is catching on fast.
Just read this interesting article related to this on About.com (I copied the URL at the bottom). It makes a very interesting point that about 1 in 4 women has high blood pressure (not too surprising), but that about 1/3 of them don't know why! http://womenshealth.about.com/cs/highbloodpressur/a/hypertentionhbp.htm
It is not surprising for me to hear that 1 in 4 women are having high blood pressure as i get these kind of cases on a daily basis. the discussion topic is how can we educate them and make them aware of this hazardous health issue
Wow. Didn't know women were higher risk for hypertension. Most of the people that I know that have hypertension are men.