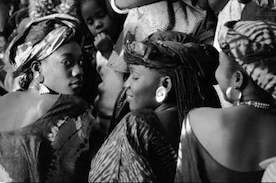 Surfacing research proves the Sub-Saharan African traditions of Female Genital Mutilation and Female Genital Cutting (FGM/FGC) lead to long-term health consequences. Such health problems are found to impact the delivery and health of newborns.  Researchers and anthropologists from the Autonomus University of Barcelona collected data from 588 females in The Gambia.  Data were carefully gathered through questionnaires and physical examinations of the female patients, and analyzed with 95% confidence intervals. The results showed that 75.6% of the women had undergone FGM or FGC, and these women had a significantly higher prevalence of health problems including dysmenorrhea, vulvar or vaginal pain, fibrosis, keloid, synechia, and sexual dysfunction.  Furthermore, research showed these women were four times more likely to experience delivery complications such as perineal tear, obstructed labor, episiotomy, cesarean-necessitated delivery, and stillbirth.

The Foundation for Research on Women’s Health reported that seven of The Gambia’s nine ethnic groups practice FGM or FGC on girls between the ages of 10 and 15.  Female Genital Mutilation and Cutting occurs in four types.  Type I is a partial clitoridectomy, Type II is a full removal of the clitoris, Type III is a partial or full excision of the external genitalia, and Type IV is vaginal sealing.  While FGM and FGC are not common in many parts of the world, The Gambia sees these practices as rooted in customs and traditions dependent upon ethnic, religious, and cultural foundations.  Culturally, these practices are seen as “rites of passage” into womanhood, and guarantee a woman’s sexual purity, as pleasure is removed from the woman’s body.

Alternatively, FGM and FGC have been internationally recognized as violations of women’s rights and cruel discriminations against women.  Furthermore, since these practices are almost always carried out on minors, sometimes without parental consent, issues of children’s rights also come into play.  The World Health Organization characterized these practices as violating “a person’s rights to health, security, and physical integrity” as well as “the right to be free from torture and cruel, inhuman or degrading treatment” especially when these practices frequently lead to death or long-term health problems.

While it is difficult to impose regulations on cultural traditions so foreign to the Western world, it is important to document the surfacing research that points to the long-term hazards that accompany these practices.  The next steps should be educational outreaches informing the women of The Gambia of the dangers involved with FGM and FGC. This way, they may best make decisions to protect their reproductive health while preserving and respecting their cultural identity.