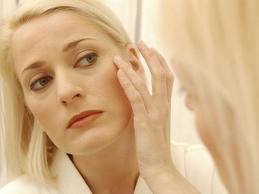 "In postmenopausal women the appearance of the skin may offer a glimpse of the skeletal well-being, a relationship not previously described," said Lubna Pal, MD, a reproductive endocrinologist at Yale School of Medicine, New Haven, Conn.

The study demonstrates only an association between bone density and skin wrinkling. However, Dr. Pal called these findings noteworthy."This information," Pal said, "may allow for the possibility of identifying postmenopausal women at fracture risk at a glance, without dependence on costly tests."

The study is an ancillary study to an ongoing multicenter trial called the Kronos Early Estrogen Prevention Study, or KEEPS, which is funded by the Aurora Foundation and the Kronos Longevity Research Institute in Phoenix. This ancillary study included 114 women in their late 40s and early 50s who had had their last menstrual period within the past three years and who were not taking hormone therapy. Women were excluded from participating if they had undergone any cosmetic skin procedures.

Women received a score for face and neck wrinkles based on the number of sites with wrinkles and on the depth of the wrinkles. The skin firmness or rigidity was measured at the forehead and the cheek with a device called a durometer. Study participants also underwent measurement of bone density by dual X-ray absorptiometry (DEXA) and by a portable heel ultrasound device.

The investigators found a significant inverse correlation between the wrinkle score and the bone density, meaning the higher the score (and the worse the wrinkles), the lower the bone density. This relationship was evident at all skeletal sites -- hip, lumbar spine and heel -- and was independent of age, body composition or other factors known to influence bone density, Pal said. Additionally, firmer skin of the face and forehead was associated with greater bone density.

Although the connection between bones and skin may seem unclear, Pal explained that they share common building blocks -- a group of proteins known as collagens. As we age, changes in collagen occur that may account for age related skin changes including worsening skin wrinkles and sagging skin, and also contribute to deterioration in bone quality and quantity.

Long-term studies are needed to substantiate a relationship between wrinkles and the risk of bone fracture, Pal said.

"Ultimately, we want to know if intensity of skin wrinkles can allow identification of women who are more likely to fracture a bone, especially the femoral neck or the hip, an often fatal injury in older people," she said. "If this is the case, then including the study of skin wrinkles to other clinical risk factors may allow identification of fracture risk in populations that do not have access to more costly technology."   The results were presented at The Endocrine Society's 93rd Annual Meeting in Boston.

Haha! I agree Carole. I just hope my wife's bone density is good. I find women pay too much attention to wrinkles,women should embrace it. Like a victory medal for going through life!
That was a very interesting post, who would believe there was a correlation between wrinkle and bone density!
I found this blog post very interesting and I think that our skin can tell us many things about the state of our organs, tissues, and yes - bone density.
I Agree with Carole. I hope my bone density is good.
So weird and random the parts of our bodies that give clues to other parts. We're some kind of complex thing I guess.