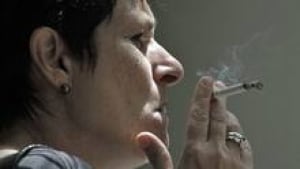 New research proves yet another reason for women to quit smoking: smoking may cause earlier signs of menopause. Heavier smokers may enter menopause up to nine years earlier compared to nonsmokers.

In the United States, the average age for menopause is 51. Previous studies have already showed that smoking can hasten menopause by one to two years, regardless of race or genetic background. New research shows that menopause can happen much quicker specifically in white female smokers who are carriers of two different gene variants.

Over 400 women ages 35 to 47 from the Penn Ovarian Aging Study were compared. Heavy smokers, light smokers, and nonsmokers who were carriers of the CYP3A4*1B variation had an average time-to-menopause of 5.09 years, 11.36 years, and 13.91 years, respectively, after entering the study. This suggests that certain white females with a specific genetic make-up may enter menopause up to nine years earlier than nonsmoking females.

The average time-to-menopause for white carriers of the CYP1B1*3 variation, was 10.41 years, 10.42 years, and 11.08 years among heavy smokers, light smokers, and nonsmokers, respectively. The results were statistically significant but the discrepancies were obviously not as huge as the CYp3A4*1B variant.

The variations of the genes, specifically CYP3A4*1B and CYP1b1*3, were not shown in the research as the cause of earlier menopause, but there is no doubt that an association exists. The research did not examine the implications of smoking on menopause in other populations including African Americans. Regardless, all women should understand how smoking may affect their menopause and health in general, and they should consider quitting smoking. To learn about other lifestyle and menopause associations, visit Northwestern's menopause website here.
Reference: Samantha F. Butts, Mary D. Sammel, Christine Greer, Timothy R. Rebbeck, David W. Boorman, Ellen W. Freeman. Cigarettes, genetic background, and menopausal timing. Menopause, 2014; 1 DOI: 10.1097/GME.0000000000000140