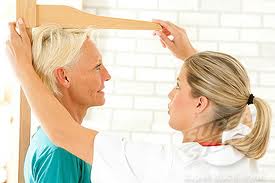 Elderly men and women who lost height over a two-year period are up to 54 percent more likely to suffer a hip fracture than those whose height was unchanged, according to a new study from the Institute for Aging Research of Hebrew SeniorLife, an affiliate of Harvard Medical School.    “Recent height loss in both elderly men and women appears to provide a simple indication of who’s at risk for hip fracture,” says lead author Marian T. Hannan, D.Sc., M.P.H., a senior scientist in the Institute’s Musculoskeletal Research Center. This information, she adds, could prompt clinicians, seniors and their families to take measures to prevent potential falls and hip fractures.

Published online in the Journal of Bone and Mineral Research, the study found that recent height loss, for both men and women, was associated with a 21 percent to 54 percent increased risk for hip fracture within a subsequent two-year period for every inch of height lost. Men with long-term height loss of two inches or more had nearly twice the risk of fracture than men with less height loss.

Hip fracture has become a major public health concern in the United States. More than 300,000 Americans fracture their hip each year, most of them over age 65, often leading to significant functional impairment, nursing home admission, and death. According to the Centers for Disease Control and Prevention, nearly 20 percent of hip fracture patients die within a year of their injury. Hip fractures cause more deaths, disability and increased health-care costs than all other fractures combined.

The study examined height measurements and hip fracture rates over a 24-year period for 3,081 adults from the Framingham Heart Study, as well as a shorter, two-year term when study participants were elderly. Long-term height loss was calculated as the difference between height measurement at the initial 1948 Framingham examination and the baseline examination for this study in 1974-75. Recent height loss was the two-year loss measured during exams conducted every two years after the baseline exam. Hip fractures were determined through a review of hospital, medical and surgical records, as well as imaging reports.

Height loss was associated with a 40 percent to 54 percent increased risk of hip fracture in men for both long-term and recent height loss; older women with recent height loss had a 21 percent chance of fracturing their hip. Muscle weakening, postural changes, disc degeneration, joint space narrowing, and spinal deformities may all contribute to height loss, says Dr. Hannan, an associate professor of medicine at Harvard Medical School. Kyphosis, or curving of the spine that causes a bowing of the back, may also contribute to height loss and fracture risk.

Current risk assessment tools only consider a patient’s current height, not their amount of height loss. The ability of tools such as bone density testing and computed tomography to predict fracture risk may be enhanced by adding simple height measurements. “Height loss is easily measured,” says Dr. Hannan, “and may indicate potential for subsequent hip fracture, and thus could serve as an alert to clinicians and elders to seek medical evaluation.”

If an older person notices that he or she is losing height, Dr. Hannan says it is reasonable to convey this information to a health-care provider and ask about screening for osteoporosis or the likelihood of a future fracture.

Dr. Hannan’s study was funded by the Arthritis Foundation and the National Institutes of Health.

With my dad 87 and my mom 82 and my mother in law aged 79, this is an invaluable tool to monitor bone loss. In my mom's case, she fell 2 years ago and is now walking well and is doing physical therapy for her balance. This has really helped her so readers should be aware of this. Distressingly, she was told to take shots of a certain medicine that would build bone mass but the cost is astronomical (about $500 per month) and one few could afford. The drug manufacturer had no program for those in financial need either. In any event, this is a great tool for monitoring my loved ones. So thank you.
When you combine fragile bones with an increased risk of falling due to aging you have a very dangerous situation for seniors living on their own. The elderly should be allowed to live in their own homes as it is both feasible and safe, however the real danger from falling while alone makes this difficult. There are several options available including hiring a home care provider or investing in a senior alert system, the latter of which is a much more affordable alternative.
Articles that you write may give inspiration for my students, hopefully in the future could be even more useful articles that you can write. thank you
Seniors are often unaware of many of the signs of osteoporosis until they suffer from a fracture r/t a fall.