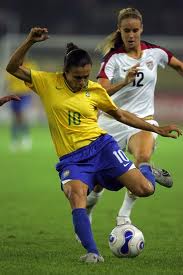 With the Women’s World Cup in full swing (congrats to the US team for upsetting Brazil in the semifinals!), soccer fans can now rest assured that women are less likely than men to fake on-field injuries, according to a new study by researchers at Wake Forest Baptist Medical Center published in the July issue of the journal Research in Sports Medicine.

“Injuries are common in women’s soccer and seem to be on the rise at the international level,” said Daryl Rosenbaum, M.D., an assistant professor of Family and Community Medicine at Wake Forest Baptist. “The goals of our study were to determine the frequency of apparent injury incidents in women’s international soccer and estimate what proportion of these incidents is authentic. It is clear from this study that female players don’t fake injuries at the same rate as their male counterparts.”

Rosenbaum said that in 2008, the International Federation of Association Football (FIFA),  issued a directive calling for “the football family to unite in denouncing injury simulation and working to eradicate this scourge from the game.” Results of a study conducted in 2010 by Rosenbaum show that the faking or exaggerating of injuries at the men’s international level may be a valid concern. He hopes his research will help determine if injury simulation in soccer is due to the nature of the sport or is specific to certain types of participants.

For the latest study, video recordings of 47 televised games from two international women’s tournaments were reviewed to identify incidents in which a player behaved as if injured. Apparent injuries were considered “definite” if a player withdrew from participation within five minutes or if bleeding was visible; the remaining incidents were considered “questionable.” A total of 270 apparent injuries were observed, a rate of 5.74 per game. The “definite” injury rate was only 0.78 per match compared to 4.96 for “questionable” injuries.

Rosenbaum’s research indicates that apparent injury incidents for women are much less frequent than for men, however, occurring at a rate of 5.74 per match as compared to 11.26 per men’s match. The proportion of apparent injuries that were classified as “definite” was nearly twice as high for women, 13.7 percent, as compared to 7.2 percent for men.

Rosenbaum said “questionable” injuries are more likely to be associated with contact and referee sanctions than “definite” injuries, which may indicate that players may use these situations to try to deceive referees. There was no evidence that teams that did this frequently won more often, nor was there any evidence that players used injury simulation as a way to try and rest or kill time.

“In the end, I think this study shows that women are less likely than men to fake soccer injuries,” Rosenbaum said. “What isn’t clear is if injury simulation is used to gain a tactical advantage. Only the players themselves know the answer to that question.”

As a senior I must say that it is refreshing to see the results of womens' increasingly widespread participation in sports. It is also satisfying that their civilizing influence will be felt more and more. These stats are impressive and it would be great to see a movement for the elimination of any fakery and of the male attitudes to sport. The Gladiator approach has practically ruined hockey e.g., with a totally unacceptable number of serious head injuries.
Interesting article and well written. Although I do feel faking injury on the field is a football thing entirely, than man or women. I watch other sports here in the UK and you never see anything like you would on a football field. Think it's more down to spoilt millionaire players, than man or woman.
Great information, I never realized the statistics behind women injuries compared to men. I will definitely look a little further into.
As a father of two girls and two boys, and a youth soccer coach of girls ages 5 all the way through college, I can attest that there is a certain toughness and resiliency and dedication to straight-forward sports play that girls and young ladies possess that far exceeds their male counterparts. While injuries do occur, female players (in my experience) have always played them down, and refused to play the foul unless it was a really shocking (like a ball to the nose) or terribly painful collision or legitimate injury that just stopped them out of sheer pain...for only for a little while. There were many times when I had to remove players from the field when they were legitimately hurt, but did not want to let their teammates down. I was proud to watch most of the Women's world cup with my daughters and prouder still of the great examples of courage, leadership and competitive spirit that the USWNT displayed.
Good to see articles like this. My daughter plays soccer and is just as tough as the 'boys'. I don't know where these misconceptions come from.
I think you can be proud for the last results for the USA, especially the way they play. Not in much time, I figure about 2 or 3 years will be a world power. And speaking of the matter that women pretend to fewer injuries, true.
Interesting article, like Jeff my daughter also plays soccer and I have to agree they are just as tough!
All in all, injuries (fake or not) will always be part of the tactical play in a professional sports game. The statistics presented in this article are definitely interesting however.
They may be tough and resilient but they are also more prone to serious ligament and tendon injuries - particularly around the knee.
Injuries will always be part of sports games and there were many times when I had to remove players from the field when they were legitimately hurt, but did not want to let their teammates down.
I believe that women are more open to honesty than men. Testosterone surely influences the play and thus an attempt to gain tactical advantage. And I wonder if faking an injury will not end up harming the "questionable" player. You know the saying what goes around comes around. That said it's brilliant womans football is getting more focus. Maybe the men can learn something from the women?