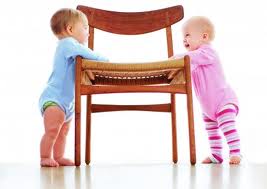 Studies have shown that language development varies between the sexes, with males generally gaining language skills at a slower rate. Prenatal testosterone is known to influence fetal neurodevelopment, and preliminary studies have suggested that the hormone is associated with language delay.  Researchers from the U of Western Australia explored this issue in a large cohort of children.  They collected umbilical cord blood samples from 861 randomly selected births and measures the bioavailable testosterone levels.  As expected the males had a much higher level of testosterone in the umbilical cord blood than the females. For the following three years the parents completed an Infant Monitoring Questionnaire annually that measured communication (language), gross-motor, fine-motor, adaptive and social development.

As previously reported in other studies, a greater proportion of males had greater communication delay at all three assessments stages.  In addition to the language deficits, males were more likely to have delays in fine-motor function and personal-social skills at age 3.  Conversely, females exposed to the highest levels of testosterone had a reduced likelihood of having a language delay at that age.

Males exposed to the highest testosterone levels were more than twice as likely to have a language delay at age 3, according to Andrew Whitehouse, PhD, of the University of Western Australia in Perth, and colleagues.

"These data suggest that high prenatal testosterone levels are a risk factor for language delay in males, but may be a protective factor for females," according to Whitehouse.   "Replication of these findings is essential, and may help refine our understanding of the level of testosterone that is associated with a detrimental effect on language development in boys."  The researchers expected the results in males but found it difficult to explain the protective effect in females.

They speculated that it might have to do with sex differences in how the brain lateralizes function across left and right hemispheres.
Source reference:
Whitehouse A, et al "Sex-specific associations between umbilical cord blood testosterone levels and language delay in early childhood" J Child Psychol Psychiatry 2012; DOI: 10.1111/j.1469-7610.2011.02523.x.

Hello, I think that this isn´t absolutely true. My point of view is that testosterone causes boys more inclined towards physical activities for intellectual activities. Girls happens in reverse. Congratulations on this blog, I read regularly, study psychology and I love everything that you publish. Excuse my english, I´m spanish and I don´t write very well.
Interesting article. There is also a pattern how males are more likely to develop speech impairment than females. Thanks Raj
I enjoy reading your blog. I thought boys language skills developed earlier.
Very interesting. My boy is 1.2 yo and still doesn`t talk. I hope he`ll start talking soon...
A really interesting article i always thought boys developed language skills earlier guess I was wrong. I'll definitely be looking into this study further