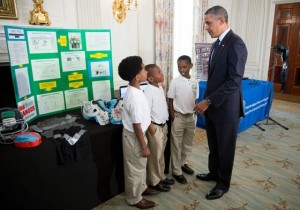 On Monday, April 22, the Obama administration demonstrated its continued commitment to fostering the next generation of leaders in science, technology, engineering, and math (STEM) by hosting the third annual White House Science Fair.  100 students from 40 states showcased their projects in the White House’s public rooms and East Garden to business leaders, celebrities, and, of course, Mr. Obama himself.  Projects on display included a bicycle-powered emergency water sanitation system, a cloud computer program that improves cancer detection, and a fully functional prosthetic arm that cost only $250 to build.

President Obama used the occasion to announce his ‘all hands on deck’ plan to create and expand federal and private-sector initiatives designed to encourage children to study STEM.  The plan places particular focus on the inclusion of women and minority students, and those who are from low-income and military families.  According to Obama, “This is the time to reach a level of research and development that we haven’t seen since the height of the space race.”

In his 2014 budget request, the president asks that $180 million be designated to STEM programs that increase the participation of students (kindergarten through graduate school) from groups that are traditionally underrepresented in these fields. He also requests another $265 million to create a corps of master teachers and support educational entities and businesses focusing on STEM education.  85 million of this money would be put toward the administration’s goal of adding 100,000 math and science teachers over the next 10 years.

Such a strong administrative emphasis on increasing the participation of unrepresented minorities and women in STEM fields is music to the ears of the Women’s Health Research Institute, as our own Women’s Health Science Program (WHSP) strives to do this very thing.  In 2007, Dr. Teresa Woodruff created WHSP to provide science education programs to females from underserved communities in Chicago. WHSP targets young women who are considering careers in science and medicine and prepares them with valuable knowledge and skills to successfully become the next generation of women science leaders. Since 2007, over 150 high school girls from across the Chicago area have participated in one of the WHSP academies.

This summer, WHSP will run two academies: the Infectious Disease Summer Academy (July 8-12) and the Oncofertility Saturday Academy (July 22-26).  Both are open to 10-12th grade female students attending Chicago Public Schools and are designed to encourage and inspire the girls' interest in science and medicine by involving them in hands-on laboratory and clinical activities and pairing them with graduate and medical student mentors.  Tuition for both programs is free, but there are a limited number of spots and students must apply online and, if asked, attend an interview with program directors.  For more information about WHSP and how to apply to the upcoming academies, click here to visit our website.