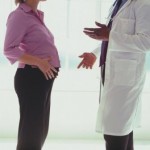 Women who are obese at the start of their pregnancy may be passing on insufficient levels of vitamin D to their babies, according to a new Northwestern Medicine® study.   The study found that babies born to lean mothers had a third higher amount of vitamin D compared to babies born to obese moms.

Vitamin D is fat-soluble, and previous studies have found that people who are obese tend to have lower levels of the vitamin in their blood. In this study, both obese and lean mothers had very similar levels of vitamin D at the end of their pregnancies, yet obese women transferred less vitamin D to their offspring compared to lean women.

“Nearly all of mothers in this study reported taking prenatal vitamins, which may be the reason why their own vitamin D levels were sufficient, but the babies born to the obese mothers had reduced levels of vitamin D,” said Jami L. Josefson, MD, first author of the study. “It’s possible that vitamin D may get sequestered in excess fat and not transferred sufficiently from an obese pregnant woman to her baby.” Josefson is an assistant professor of pediatrics at Northwestern University Feinberg School of Medicine and an attending physician at Ann & Robert H. Lurie Children's Hospital of Chicago.

It is unknown what health risks babies born with vitamin D insufficiency may face. Recent studies have linked low vitamin D in adults to an increase in autoimmune diseases, inflammation, and obesity.

The study, published Jan. 4 in the Journal of Clinical Endocrinology and Metabolism, was designed as part of a longer-term project to investigate whether body fat at birth is a predictor of body fat in later childhood and adulthood. Because vitamin D deficiency is associated with a host of health conditions, including obesity, the researchers included the analysis of the mothers’ and babies’ vitamin D levels.

Vitamin D levels were measured from blood collected from 61 mothers at 36 to 38 weeks gestation and umbilical cord blood was collected from their babies immediately following birth. Body fat, weight, and volume of the babies were also measured/“The range of body fat of the babies in this study was similar to other studies reporting neonatal body fat,” Josefson said. “What was novel about this study was that we found babies born with higher vitamin D levels had more body fat. That's in contrast to studies in children and adults who have an inverse relationship between levels of vitamin D and body fat, where the higher their vitamin D, the lower their fat.”

Josefson said more research needs to be done on the role vitamin D may play in the health of babies, and she plans to continue studying this sample again to follow up on the babies’ health outcomes.“Obese women may need larger amounts of vitamin D supplementation to provide their babies with sufficient levels of vitamin D while they are in the womb,” Josefson said.This study underscores the importance of understanding the evolving relationships between maternal obesity, vitamin D nutritional status and body fat in the neonatal period, childhood, and adulthood, Josefson said.

So is the answer more vitamin D via supplementation or sunlight or look at pre-pregnancy weight loss, which would generally incvolve vit d supplementation anyway?
sufficient levels of vitamin D during pregnancy is so important as it is written in this article, and when the baby is born, some countries such as Indonesia hanging kids to their babies in the morning sunshine to get vitamin D which is useful for their children.
Nice article, i just found out that obesity can lead to vitamin D deficiency in the mother. I would advise my friends to go on a diet before she was pregnant