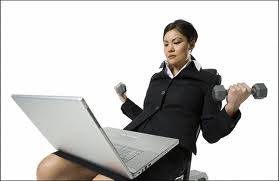 Women who exercise regularly spend as much time sitting as women who don’t, according to a new Northwestern Medicine study. Emerging research shows that prolonged sitting has significant health consequences that even being a dedicated exerciser doesn't prevent women from spending too much of their day sitting.

This research is the latest indication that public health recommendations should be established to encourage Americans to limit the amount of time they spend sitting every day, said Lynette L. Craft, first author of the study and an adjunct assistant professor in preventive medicine at Northwestern University Feinberg School of Medicine.

“We all know someone who gets a good workout in every day, but then spends a large portion of their day sitting in front of a computer with few breaks,” Craft said. “If these people could replace some of the sitting with light activity---just getting up, moving around, maybe standing up when talking on the phone, walking down the hall instead of sending an email---we do think they could gain health benefits.”  Past studies have shown that people who sit for extended periods of time---even those meeting exercise recommendations---are more likely to develop chronic conditions such as diabetes, obesity, cardiovascular disease and some cancers.

This was the first study to use an objective measuring device to examine the relationship between the type of exercise recommended in the government’s Physical Activity Guidelines for Americans and sitting. The guidelines recommend adults engage in a minimum of 150 minutes of moderate intensity aerobic activity every week.

While many of the women in the study met or exceeded 150 minutes of physical activity per week, in reality only a fraction of the women’s days were spent being physically active. The women in the study spent an average of nine hours a day sitting. That number is consistent with previous results from much larger studies that examined the number of hours Americans spend sitting every day.

“I think some people assume, ‘If I’m getting my 30 to 40 minutes of physical activity a day, I’m doing what I need to do for my health,’” Craft said. “Of course, exercise is very important and is associated with many positive health benefits, but negative health consequences are associated with prolonged sitting, and this study shows that just because you’re physically active doesn’t mean you’re sitting less.”

Trying to replace some sitting time with more light activity throughout the day---along with the recommended bouts of moderate and vigorous exercise---is an approach more Americans should try to take, Craft said.

The Northwestern research was done in collaboration with Ted Zderic, of the Pennington Biomedical Research Center and was published in the International Journal of Behavioral Nutrition and Physical Activity.

The ample flow of mood-improving chemicals that dancing releases means, of course, that raising the roof can elevate your mental state. Just one lively dance session can slay depression more than vigorous exercise or listening to upbeat music, Getting jiggy with others also leads to less stress and stronger social bonds, key factors in both mental and physical health, . But perhaps the coolest part about grooving is that it saves your mind—literally. Dancing gives your noggin's memory, coordination, and focus areas an intense workout, leading to stronger synapses and beefed-up gray matter.