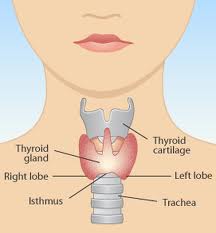 Despite the increase, thyroid cancer death rates have been relatively stable over the years.   The ACS predicts 1,690 deaths in the U.S. in 2010.  It remains a very treatable disease. Many people develop benign lumps, known as nodules, in the neck, but only one in 20, are malignant.   Even when it is an aggressive form of the disease, there is a 97% survival rate after 5 years.

The cause for this increase in new cases has created much debate among the scientific community.  Is the real reason better detection rates or is there truly an increase in cases?

Over the last 30 years, ultrasound and fine needles biopsies have helped diagnose cases that would never have been found before.  A study published in the Journal of the American Medical Association in 2006 reported that 140 % increase in thyroid cancer from 1973-2002 was a result of increased diagnostic capacity.  Many of these were extremely small, papillary thyroid cancer tumors (most common and treatable type) that would have never caused  problems in the majority of cases.

This "over-diagnosis" raises another debatable question, are we doing unnecessary surgeries on cancers that are unlikely to create harm?  Further confusing the issue is the fact that about 10-30% of fine needle biopsies come back with an inconclusive diagnosis for malignancy, yet, all or part of the thyroid is removed. Once the final pathology is done on the removed tissue, only 15-20% turn out to be malignant.

This is definitely a complicated issue and a new molecular test is undergoing clinical trials at nearly 50 sites that researchers hope will sort benign from malignant nodules in the indeterminate fine needle  biopsy samples. If this new test helps produce a more certain diagnosis, patients who come back negative could avoid surgery but continue to be monitored through clinical exams and occasional ultrasounds.

My symptom of thyroid cancer was swelling in the neck. This really was of no major concern at the time, but relative tests found it to be cancer. Treatment commenced almost immediately, was hospitalized and treated with radioactive iodine. Treatment was successful and regular follow ups were clear. That was 14 years ago now, still have to have annual follow up and regular blood tests, but all is well.
I didn't know about the higher incidence of Thyroid Cancer, but it appears that thyroid issues are VERY common among women; especially middle aged women. As a middle aged woman, that kind of concerns me.
there should be a baseline data to compare and determine whether the increase is due to better detection or an actual spike in cases due to various causes. I would rather believe the former.
The incidence of thyroid cancer can only go up with the incidence like the Japanese nuclear disaster taking place. How much can patassium iodide tablets can prevent this from happening is anyone's guess
The constant death rate is in my opinion a strong indicator for better (over?) diagnosis. This article makes it very clear that we should NOT jump to conclusions if one statistic shows an increase of incidents without taking the whole picture into account.