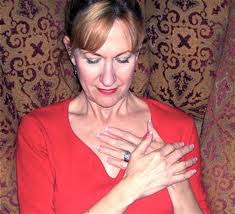 Women with the most serious type of angina are three times as likely as men with the same condition to develop severe coronary artery disease (CAD), researchers have found.

In the study, Canadian researchers analyzed the medical records of 23,771 patients referred for a first diagnostic angiography. They found that women over age 60 with the most serious type of angina (Class IV) had a 21 percent higher absolute risk of developing CAD than did men. Women younger than 60 had an 11 percent greater risk of CAD than men in the same age group.

When the researchers factored in other variables commonly associated with CAD -- such as diabetes, high blood pressure, high cholesterol, smoking and age -- they found that Class IV angina increased the risk of CAD by 82 percent in women and 28 percent in men.

The study findings are published in the July issue of the Journal of Internal Medicine.

"CAD is the leading cause of ill health and death in men and women in the western world, accounting for over a third of deaths. In fact, more women die from CAD than breast disease every year. Despite this, there is still a persistent perception that CAD is a man's disease," lead author Catherine Kreatsoulas, of the department of clinical epidemiology and biostatistics at McMaster University in Hamilton, Ontario, said in a news release from the journal's publisher.

However, the university's research found that women who have what the Canadian Cardiovascular Society defines as Class IV angina -- which means they are unable to perform any activity without symptoms and even suffer angina at rest -- "are significantly more likely to develop severe CAD than men with the same condition," Kreatsoulas added.

The findings are crucial for doctors deciding which patients should be referred for coronary angiography, Kreatsoulas said.