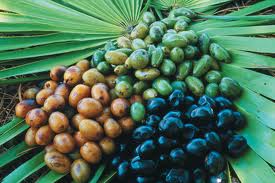 with the men in your life.     Long-term adminstration of the dietary supplement saw palmetto, even at three times the usual dose, did not reduce symptoms of prostate enlargement significantly better than placebo in a large group of middle-aged men, according to the most rigorous study of the popular herb.

"The bottom line is don't waste your money on saw palmetto supplements for an enlarged prostate," said senior study author Kevin McVary, M.D., a professor of urology at Northwestern University Feinberg School of Medicine. "It doesn't work any better than a placebo.”  McVary suggested men with enlarged prostate talk to their doctors about medications that shrink or relax the prostate or laser surgery, the most common surgical approach.

The study from researchers at 14 institutions across the United States and Canada appears in the Sept. 28 Journal of the American Medical Association. The lead author is Michael Barry, M.D., of the Massachusetts General Hospital.

Benign prostatic hyperplasia (BPH), commonly referred to as an enlarged prostate, affects around half of men at age 50 and three-quarters by age 80. The condition can be mild, but for many men symptoms such as frequent urination – including the need to visit the bathroom several times at night –- difficulty urinating and weak or intermittent urinary flow interfere with their quality of life. Several conventional medications are available to treat BPH, but their side effects can be unpleasant.

Saw palmetto extract is a common alternative treatment for BPH. Some early studies indicated that saw palmetto could reduce symptoms of BPH, but recent, more rigorous trials had less promising results. The largest previous trial, enrolling 225 men over age 50, found that a standard dose of 160 milligrams twice a day for one year was no better than placebo at relieving symptoms. The current study was designed to see whether longer treatment with higher doses would give better results.

Conducted at 11 North American hospitals, the current trial enrolled men over 45 with moderate symptoms of BPH. Participants took daily doses of identical gelcaps that contained either saw palmetto extract or a placebo. The dosage was doubled 28 weeks into the study and then tripled at 48 weeks. Those receiving saw palmetto started at a standard daily dose of 320 milligrams, increased to 640 and ended at 960. Of the more than 300 participants who completed the study, all reached the triple dose with no significant side effects. At the end of the 72-week study period, participants receiving saw palmetto showed less improvement in a standard index of BPH symptoms than did those taking the placebo.

Support for the study – which was conducted by the Complementary and Alternative Medicine for Urologic Symptoms Study Group – included grants from the National Institutes of Health.

By Marla Paul is the health sciences editor at Northwestern.

yeah! i would definitely tell my partner about this post. such a big help for them boys.
this is disappointing, although it is almost certain another study will come out saying the opposite. While we would like our science to be exact, it rarely is.
I think Saw Palmetto Ineffective for Prostate Symptoms is one of the best info at this blog :)
Well there's another product I need to stop trying, crud.