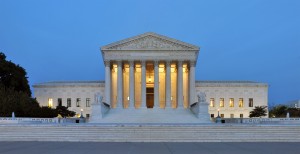 On March 25, the Supreme Court heard arguments regarding challenges to the contraception mandate of the Affordable Care Act, with a decision expected to come down in late June. Here’s a rundown of the main aspects of this important case:

What is being challenged?

Who is challenging the law?

The cases were brought by two for-profit corporations, that while not religious or religiously-affiliated, claim to operate based on religious principles. The corporations are Hobby Lobby, a craft store chain based in in Oklahoma City and owned by a Christian family, and Conestoga Wood Specialties, a Pennsylvania-based company that makes wood cabinets and is owned by a Mennonite family.

Why is the law being challenged?

The corporations challenging the contraception mandate believe that certain forms of birth control drugs and devices, including the morning after pill and IUDs, are equivalent to abortion because they may prevent embryos from implanting in the uterus. As such, they believe that covering the cost of these forms of contraception makes the them complicit with abortion. The corporations do not oppose all forms of birth control, including condoms, diaphragms, sponges, certain drugs and sterilization.

How is the administration defending the law?

Donald B. Verrilli, Jr., the current solicitor general who is representing the U.S. administration, has stated that the law offering comprehensive contraceptive care to women promotes public health and ensures equal access to healthcare for women. He also emphasized that it should be doctors, not employers, who should decide the best form of contraception for women. Additionally, a brief from the Guttmacher Institute points out that many women cannot afford highly effective forms of birth control, and so upholding the law will reduce unplanned pregnancy and abortions.

What are the potential outcomes and implications of the decision?

There are many ways the decision could go, each with varying repercussions. If the Supreme Court decides the RFRA does not cover for-profit organizations, it will end those organizations’ ability to challenge the contraception mandate based on religious beliefs. The Supreme Court could decide the RFRA does apply to for-profit organizations, but still rule on the side of the administration. This would be a less decisive win for the administration that would likely lead to more challenges. If the Supreme Court rules in favor of Hobby Lobby and Conestoga Wood Specialties, it will impact women’s access to affordable birth control, while opening the door to other religious objections raised by employers, such as hiring gay and lesbian individuals, or offering benefits to same sex spouses.

For more information, see the sources below: