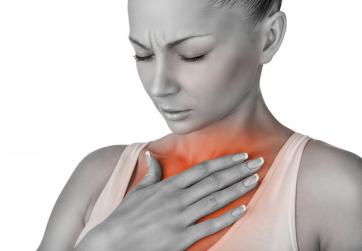 Most women get heartburn from time to time. It may come as a burning sensation in the chest, or a bitter taste in the back of the throat. Heartburn is one word people use to describe reflux. It happens when stomach contents come back upwards. Reflux is sometimes painless: You may have trouble swallowing or get a dry cough, perhaps some wheezing. Occasional reflux episodes are normal. Like millions of Americans, you can manage reflux by avoiding foods that don’t agree with you—things that are fatty, spicy or acidic—or by eating smaller meals. If reflux occurs less than once a week, you can usually cope by making lifestyle changes or using over-the-counter medications. “We all have a little reflux when we burp or belch,” says Dr. John Pandolfino of Northwestern University.

But, of the 20 million or more Americans with reflux, about 5% have significant episodes 2 or 3 times per day. When severe events occur this often, it’s not ordinary reflux. It may be gastroesophageal reflux disease (GERD). You may need prescription medications to control it. Most studies suggest the overall incidence of heartburn, regurgitation, non-cardiac chest pain, and wheezing is the same in both sexes, though there may be a higher intensity and frequency of symptoms in women, but the clinical significance is not clear. Heartburn is more prevalent during pregnancy and increases in each trimester but that  is believed to be due to anatomic changes such as the pressure of the expanding uterus or, possibility, something to do with progesterone level during pregnancy. It usually goes away after pregnancy. Obesity and body mass index seems to increase the risk of GERD. GERD should be taken seriously. Stomach (gastric) contents contain acid needed to digest food. In reflux, these contents wash upward into the esophagus, a slender tube connecting the mouth and the stomach. Because the lining of the esophagus isn’t meant to touch gastric acid, the acid can irritate the lining of the esophagus and lead to bleeding and scarring. In adults, GERD can raise the risk of cancer of the esophagus. And if you have asthma, GERD can make it worse. As for babies, reflux is common in healthy infants. Most babies outgrow reflux by 13 months, but if they don’t, they too may have GERD. GERD can harm a child’s ability to feed and grow. It can also increase the risk for inhaling stomach contents into the lungs which could be life-threatening. People of any age can have GERD. Available medications, whether over-the-counter or prescription, can make the acid in the esophagus less intense. But medications don’t prevent GERD. Surgery can be an option if symptoms are severe and medicine and lifestyle changes don’t seem to help.  The problem isn’t that the stomach makes too much acid. In GERD, the special set of muscles between the esophagus and the stomach is weakened.

If you have reflux twice or more per week, talk to your health care provider. It’s best to start treatment early to prevent GERD from leading to more serious health problems.

How To Steer Clear of Reflux: