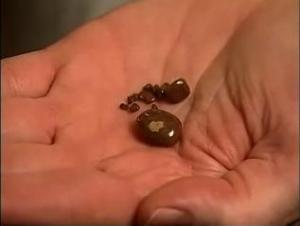 Researchers at the University of Texas Southwestern Medical Center report that estrogen therapy after menopause increases a woman's chances of developing kidney stones.  Kidney stones are common among postmenopausal women, affecting between 5% and 7% of the population in the U.S.  Up until now, only observational studies have been done looking at kidney stones and estrogen, and the results have been conflicting.   This study shows new evidence based on a randomized, placebo-controlled trial.

Lead study author, Dr. Naim Maalouf and colleagues conducted trials at 40 U.S. clinical centers where a total 10,739 post-menopausal women with hysterectomies and 16,608 post-menopausal women without hysterectomies were randomized to receive either an estrogen supplement or a placebo. Among those receiving hormones, 335 cases of kidney stones were reported versus 284 cases in the placebo groups.  In general, kidney stones are less common among pre-menopausal women than among men in the same age group, but the disparity lessens after menopause, suggesting that estrogen may have a protective effect.

However, study lead author Maalouf points out the study challenges the belief estrogen may protect against kidney stones.   "This research suggests that the opposite might be true, and it offers new information that might be considered when prescribing estrogen-replacement therapies to post-menopausal women," Maalouf says in a statement.

The study did not detect any link between kidney stone risk and body mass index, age, prior hormone therapy, coffee usage, diuretic usage, or ethnicity.

The exact mechanisms for these findings are yet to be determined.

I had a kidney stone 23 years ago, prior to menopause. I had a strong family history of such stones. I'm curious if the water intake of the study participants was followed. My experience made me a water drinker, something I had never been before. It seems hard for us women when the research implications are unclear. How helpful are mammograms? how risky is HRT? I hope this research continues.
Thanks a lot on posting this very informative article. I have been a regular visitor of your blog and I have learned many things. Kudos to you!
good job on the research but sad to say it is not a good news afterall
Thanks for the post. After having a hysterectomy I am so torn on taking estrogen. I cut my dose in half last year, but still wonder if I should stop it altogether but worry about how that would affect my quality of life...
Me, as Melissa I’m curious if the water intake of the study participants was followed and the quality of their diet, too.
I had no idea about this, yikes what next? I am approaching that stage and I happen to drink alot of coffee as well.
Thanks for the article. Report mentioning coffee as a contributor to kidney stones are lessening. The positive effects on congnitive ability cannot be disputed. What is it to be: kidney stones (treatable) or dementia (largely untreatable) - no issue in my eyes! Steve
I really love my coffee. Every morning when I arise my coffee is ready to go, but after reading this I think I should reconsider given my age. Thanks for the great information!
So although the study said post menopausal estrogen therapy may increase kidney stone risk is was still inconclusive. Did it even state what the protective state may be? I've been researching this issue and now am confused to whether it does or doesn't.
Glad to see coffee use was shown not to increase the risk of kidney stones. For a long time my doctor said it was a major contributor but he has since lessened his stance on the issue of coffee. Dunkin Donuts here I come! :) Editor's Reply....but skip the donuts!
Everytime they come out with a new study about the bad affects of coffee, it seems like another 3 studies come out in support of drinking coffee. Now they say that a few cups a day can decrease the possibilty of getting prostrate cancer! Go figure!
A good information regarding post-menopausal estrogen therapy can increase Kidney Stone Risk. some time doctor confuse our patients but this article really helpful for the people. thanks to sharing us. . . !!
Thanks for sharing this blog. My mother is using it for quite some time now. I didn't know that it is this harmful. I really appreciate you posting this article. Thanks!
well from this info i learned about menopause risk much more, txs a lot :)