Last night was the world premiere of OSA: Sisters In Science, a documentary detailing the Oncofertility Saturday Academy. This documentary told the story of what happens when young women from a small south side Chicago high school get introduced to an emerging science like Oncofertility (for more information, click here).  The film documented the hands-on experiences, classes, and testimonies of the young women of Young Women’s Leadership Charter School as they spent their Saturdays interacting with the Woodruff lab and other resources from Northwestern in 2009. 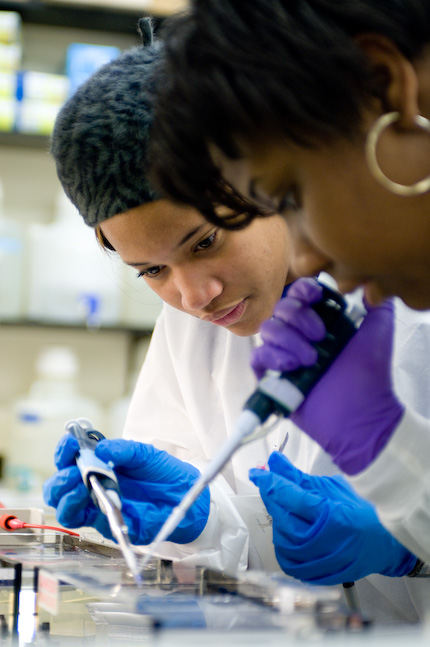 Most importantly, the documentary chronicled the evolution of the OSA students, from passionate young women in high school waiting to be sparked by inspiration, to JOSAS (Junior OSA Sisters) to SOSAS (Senior OSA Sisters).  It also told the story of these young women’s families and the role this experience had in reaffirming a relationship of empowerment through education.  It was clear that every parent thought their child capable of any achievement, and OSA gave that potential a shape and form that many parents can’t imagine.

Directors of the program, Megan Faurot and Teresa Woodruff held a panel along with the film’s creators; producer Harlan Wallach, director Stefani Foster, and the film’s editor Erin Kitzinger.  The panel was a source of reflection and enthusiasm for the whole audience, including OSA alumni, POSA (Parents in OSA), as well as attendees of the Oncofertility Consortium’s on-going Annual Summit.

The program is in its third year and is continuing strong.

The movie was so great! Everyone involved should be incredibly proud! It was so great to hear the comment from the girls that they walked in as a student, but walked out as a scientist. My favorite part was the girls' acknoweledgement that science is incredibly important in their lives, even if it has nothing to do with their careers. They understand that being an informed decision-maker and voter in our country today requires a grasp of basis science tenants, as well as the ability to actively digest information in a critical way. I LOVE that they have gained that insight at such a young age. I think all too often, our society tolerates an ignorance of science, but it really is key to simply being a contributing citizen.
This sounds like a fantastic documentary and program. If American expects to stay competitive, we're going to need more programs (and young women) like those featured in this documentary. It's so wonderful on so many levels. Young women need to know that math and science aren't just for men. Also, young women who are from economically depressed areas need to know that education can carry them to new heights.
I agree with Candace, the movie was spectacular! I have to say my favorite part is also when the girls' finally believed that science is very important in their lives. Science will be important in our lives forever.
Yes does sound a really good documentary. Im all for equality and more women are needed in the scientific community
Im all for equality and more women are needed in the scientific community