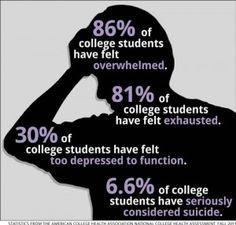 Although mental health counseling centers and awareness services exist on many campuses, if students and staff do not know about these services, do not have the tools to help themselves, and do not have the tools to help someone else in distress, these resources go unused. Hunt and Eisenberg (2010) indicate that while many college students are seen as being more privileged than their non-student peers, there is very little difference in the occurrence of mental health problems between the two groups. According to the authors, college attendance in high school graduates is at 65%. Among people age 18-24, half of all health concerns are related to mental illness. Also, onset generally occurs by the age of 24. This is a prime time for college administrators to recognize and intervene with mental health issues. Untreated mental health affects academic success, productivity, substance abuse, and relationships. Because students are often immersed in campus life including their involvement in academics, recreational activities, social interactions, and work, they are well known by their peers and by staff, who can serve as allies when needed (Wagner and Rhee, 2013).

Hunt and Eisenberg (2010) report that one in three college students have reported that they have experienced depression symptoms that have resulted in a significant life impact. Of those students, 4% admitted to having seriously considered suicide. Anxiety is another common challenge on college campuses. Academics are becoming more competitive as the prospects for employment following college are decreasing. Stress is increasing as a result. While the effects of stress are often minor and  common among college students (go here for further reading),  there is nevertheless a lurking danger, and in severe cases,  treatment is necessary.  Many students are dealing with critical levels of stress on college campuses, and this is a concerning reality.

Many campus administrators and counselors are of the opinion that they are providing appropriate information on mental health to promote awareness and prevention. However, the study by Wagner and Rhee (2013) does not bear this out. Students are likely to report that they do not find the information helpful in self-identification or in recognizing problems in others. This is a mistake given the close relationships that tend to occur on campuses. Students are interested in information on depression and anxiety, grief, stress, sleep, and relationship difficulties in addition to information on how to help others. This is a fertile population to educate as they spend considerable education and social time together.

In a study on school based mental health which is more focused on primary education, there are trends that translate to similar issues at the college level (Weist, 2005). The findings of this study indicate that mental health services were not a focus and were not well funded.  Assessment of needs and linking to services are not done effectively. Educators can certainly be promoters of mental health awareness but time and resources are limited. At the college level, these effects may be amplified. However there is great opportunity to catch mental health concerns early and before they become more severe.

Dogan (2012) points out that many mental health problems emerge in the first year of college because it is a difficult time of transition in the lifespan. There is more freedom, different types of support systems, and increased stress. College students are often struggling to find a good balance between education and social interactions. The authors also found that students are increasingly presenting with more intense problems, and that as time goes on toward graduation, stress levels and mental health issues increase dramatically. Self-referral continues to be the main avenue to first contact, but that parents, staff, and friends are also making referrals.

Given all of the above, there has been a focus on campaigns to increase awareness and to decrease the stigma of diagnosis and treatment (Livingston, et al., 2012). This was shown to make individuals more aware of problems, but did not necessarily decrease stigma which can lower the likelihood that an individual will seek treatment. Perhaps it is important for universities to change the way that they approach promotion of mental health awareness. Asking students and staff what they need for themselves and in order to help others seems to be a significant step. While this may work now, it may need to be fluid and change over the years. It also makes sense for information to be disseminated in such a way that all staff and students know where to turn if experiencing a mental health problem, or when they recognize a problem in another individual. Finally, universities can hope to succeed in the promotion of mental health if they provide the staff the necessary training and resources for that success.