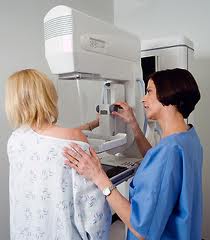 While mammograms certainly play an important role in the early detection of breast cancer (and women have responded to this selling point), when weighed against other issues related to quality of life, this benefit  becomes the question of debate among the scientific community.  While researchers have ways to measure quality of life via quality-adjusted life years (QALYS), how do women measure quality of life?  Some recent research done in the UK has caught my attention that found:    after 10 years of mammograms, a woman may get more harm than good from the screening.    When false positive diagnoses and unnecessary surgeries were taken into account, the quality-adjusted life years (QALYs) gained were significantly reduced, James Raftery, PhD, of the University of Southampton, and colleagues reported online in the British Medical Journal.

"Inclusion of the harms from false-positive results and unnecessary surgery reduced the benefits of screening by about half, with negative net QALYs in the early years after the introduction of screening," they wrote.   In 1986, the Forrest report led to breast screening in the U.K., suggesting it would reduce the death rate from breast cancer by almost a third, and with few harms and at low cost.  Since then, a number of harms associated with screening have been acknowledged, particularly false positives and overdiagnosis of cancers that would never have caused symptoms. Also, a recent Cochrane review noted that mortality reductions may be smaller than initially expected, the researchers said.

They looked at data from eight trials involving 100,000 women from the U.K., ages 50 and up, who had breast screening and found that taking the effects of those harms into account reduced the estimate of net cumulative QALYs gained after 20 years by more than half, from 3,301 to 1,536.  And when they changed the reduction in mortality from that suggested by the Forrest study to that suggested by the recent Cochrane review, the net QALYs after twenty years fell even more. .

So how does this finding relate to the everyday woman who, responsibility, has her annual mammogram and feels good about it?    Who finds a small cancer before it is felt?   How do these feelings weigh against the possibility of going through a biopsy (and finding it negative--to her relief).      On the negative side, what if having ten mammograms over the years actually creates a cancer?   These ideas and concepts are hard to understand for the layperson.

Means of reducing the harms from screening might include less frequent screens, particularly for younger women, the researchers said.  Maybe they are right.   Another solution is finding 100% safe ways to detect breast cancer at an early stage.

It is refreshing that Raftery and colleagues recognized this dilemma and wrote that more research is needed on the extent of unnecessary treatment and its impact on quality of life.  Maybe women are not that upset about these procedures vs. missing a cancer.     Further study should also focus on identifying patients who stand to benefit most from surgery, they added.

"From a public perspective, the meaning and implications of overdiagnosis and overtreatment need to be much better explained and communicated to any woman considering screening," they concluded.

So, reader, what do YOU think?

it's absolutly true, sometimes we are frightening about the true.