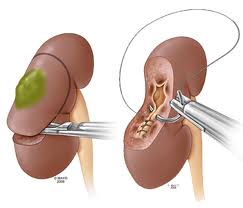 Researchers at the University of California, San Diego School of Medicine have shed new light on how surgery impacts both chronic kidney disease and bone health, particularly in women. For the first time, their findings point to the importance of pursuing kidney-sparing surgery in an effort to preserve kidney function and to reduce the risk of bone fractures later in life. The study was published in the July 19 edition of Urology and is now available online.

“When weighing the risks and benefits of partial versus radical nephrectomy, doctors and patients should take into account the impact on a patient’s bone health,” said Ithaar Derweesh, MD, senior author and urologic oncologist at UC San Diego Moores Cancer Center. “This study illuminates the fact that preserving the kidney helps to prevent chronic kidney disease and significantly reduces bone fractures and risk of developing osteoporosis.”

Complete removal of a kidney has been found to be a significant risk factor for chronic kidney disease, which carries increased risk for metabolic complications, cardiovascular disease and death. With partial nephrectomy, functional kidney tissue and healthy cells are preserved and can help prevent or reduce the risk of development of chemical imbalances such as metabolic acidosis which may later lead to kidney dysfunction, muscle wasting and osteoporosis, a direct cause of bone loss and fractures.

“Women facing kidney surgery should investigate whether partial kidney removal is an option to treat their disease as it may help prevent bone brittleness,” said Christopher Kane, MD, Professor of Surgery and Chief of the Division of Urology, and paper co-author. “Too often urologists have done radical nephrectomies for patients who were candidates for partial nephrectomy. While partial nephrectomy is more complex for the surgeon to perform, it can offer better quality of life later in life.”

Renal cell carcinoma is a commonly diagnosed urological malignancy with an estimated 57,760 new cases and 12,908 deaths in the United States during 2009. Due to advancements in technology, kidney-preserving treatments have become the gold standard in academic health systems for treating small renal masses offering equivalent cancer cure rates and superior protection of kidney function to radical nephrectomy. The UC San Diego team has one of the highest kidney preservation rates in the country and uses robotic technology to offer partial nephrectomies to patients who may have required traditional open surgery in the past.

Thank you for sharing. I would always follow you and also recommend to my friends
I'm glad i found this recent thread. I'm in the uk at the moment and they were also talking about this here and spoke about the university in california. This article has shown a lot more helpful information. Thank you for sharing this with us :)
Good info - I am sending your URL to a friend of mine who has recentky started a kidney diet to save her kidneys. Am sure she will be convinced to keep on recommendede kidney diet given the facts you stated.
Hi, Diets are hard for some people to stick to, as when we see some nice looking cakes or sweets we just can not refuse. For me I must stay on a low fat diet because of have illness (pancreatitis and gallstone,kidney stone). It changes the way one looks at life and being healthy. Having a healthy diets is a must if you want to stay healthy in life, as my bad diet is how I became very ill. SO always watch what you are eating. Do you know no foods are bad for you - It is just the way you cook them and when to eat them. Some foods must be avoided with some illnesses. stay healthy and good luck with your diets.. warmest regards, simon