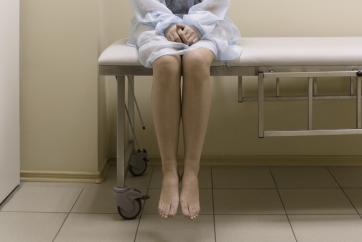 In a recent editorial in the Atlantic, writer Joe Fassler discusses an experience he had with his wife who needed emergency surgury to remove her ovary--but here's the thing, the ER team didn't believe it was an emergency. After seeing his wife Rachel in excruciating pain one morning, Joe calls the ambulance to rush Rachel to the hospital where they believed she would get immediate treatment--seeing as she described her pain as an "11" on a 1 to 10 scale. However, once they reached the hospitals, nurses told her she would have to "wait her turn" while others dismissed her by saying, “You’re just feeling a little pain, honey." The nursing team and the overseeing physician--who only asked questions and never did a physical examination on Rachel--diagnosed the pain as stones, AKA a "non-emergency" that the CT scan results would most certainly show.

However, after hours and hours of waiting on the CT scan results, the couple learned the doctor who had overseen Rachel's case had left for the day. When a new doctor was brought up to speed--and when Joe demanded the CT scan results be analyzed--the doctor discovered that Rachel did not have stones; she had what is called ovarian torsion--a phenomenon where the fallopian tube twists and cuts off blood flow. This creates a kind of organ-failure pain that is described as excruciating. Rachel was rushed into surgery, 14 and a half hours from when her pain had started.

In typical emergency-room situations, patients are to be immediately assessed and treated according to the urgency of their condition. Most hospitals use the Emergency Severity Index, a five-level system that categorizes patients on a scale from “resuscitate” (treat immediately) to “non-urgent” (treat within two to 24 hours). That being said, there are acute differences in the wait time for men and women in emergency situations. Nationwide, men wait an average of 49 minutes before receiving an analgesic for acute abdominal pain. Women wait an average of 65 minutes for the same thing.

Writer Leslie Jamison expresses this concept in her essay "Grand Unified Theory of Female Pain" which examines how oftentimes female suffering is minimized, mocked, or coaxed into silence. Researchers at the University of Maryland have also conducted research on this phenomenon and outline their finding is their paper "The Girl Who Cried Pain: A Bias Against Women in the Treatment of Pain." Rachel's experience in the ER unfortunately embodies these biases in a very real way, and hopefully do not reflect the experienes of all women who enter the hospital--but it's a sobering thought.