The article below was recently released by the National Institutes of Health.  It is important information but I post it with caution because it could make some people panic before the facts are in.    It is somewhat alarming if you do have symptoms of early menopause----but it doesn't always mean you have a serious health condition.     I went into menopause at age 41 when my children were teenagers and, and while it was 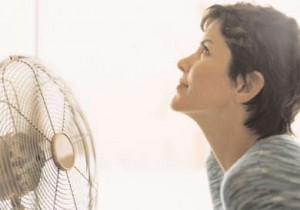 concerning,  it was just early menopause.     Of course, any atypical health symptoms need to be  checked out, no matter how old you are!

NIH News:   Hot flashes, night sweats, loss of regular menstrual periods and sleep problems. These familiar symptoms of menopause appear in most women around age 50. But if they arise before age 40—which happens for about 1 in 100 women—it’s a sign that something’s wrong. Early symptoms like these could be a sign of a little-understood condition called primary ovarian insufficiency (POI).

Most women with POI are infertile. They’re also at risk for bone fractures and heart disease. And many aren’t aware they have POI.

“Symptoms of POI can be missed because young women may not realize they’re having symptoms similar to menopause. They may not think hot flashes are worth mentioning to a doctor,” says Dr. Lawrence M. Nelson, a researcher and physician at NIH. “Some teens and young women think of the menstrual cycle as a nuisance, and they don’t mind missing periods. They don’t take it seriously, and that’s a mistake.” Missing or irregular periods are a major sign of POI.

When young women have POI, their ovaries don’t work normally. They stop regularly releasing eggs and cut back production of estrogen and other reproductive hormones. These same things happen when older women go through menopause, which is why the symptoms are similar. As with menopause, POI symptoms can often be relieved by hormone replacement therapy, usually an estrogen patch. And as with menopause, POI puts women at risk for bone loss. But with a proper diagnosis of POI and early treatment, bone health can be protected.

POI was previously known as “premature menopause” or “premature ovarian failure.” But research has since shown that ovarian function is unpredictable in these women, sometimes turning on and off, which is why many physicians now prefer the term primary ovarian insufficiency. Many aspects of POI remain mysterious—including its cause. Only 10% of cases can be traced to either to a genetic condition or to autoimmunity—a disorder in which the immune system attacks the body’s own tissues.

Nelson’s research has shown that the unexpected loss of fertility often leads to grief and symptoms of anxiety and depression in women with POI. But a recent study from his lab suggests that most young women and teens with POI still have immature eggs in their ovaries. The finding raises the possibility that future treatments might be developed to restore fertility to some affected women. Even without treatment, up to 1 in 10 women with POI may unexpectedly become pregnant after their condition is diagnosed.

Irregular or stopped periods might be a sign of other conditions, including eating disorders or too much exercise. A simple blood test for elevated levels of a molecule called follicle stimulating hormone (FSH) can help to confirm a diagnosis of POI.

“Having regular menstrual periods is a sign that the ovaries are working properly,” says Nelson. “If that isn’t happening, it’s important for girls and young women to talk to their health care provider and find out why.   Nelson is now looking for 18- to 42-year-old women with POI to enroll in clinical studies at NIH. For more information, visit http://poi.nichd.nih.gov.

Thanks for the heads up. Thank you for bringing us informative blogs. <a href="http://www.a1lawyers.info" rel="nofollow">brisbane lawyers</a>
Really good article. A+ for your blog.
The list goes on... autoimmunity comes in a variety of flavors! Thanks for this important information. I will be sending a link to all my friends. Laura H
I really like your blog, the theme is good and the info you provide is really impressive, I am going to come back to check on the e info you put up, best of luck and keep up the good work.
Does it apply on men and if does how? Note from Blog Editor. Men go through a period with their testosterone may drop. See our earlier blog. http://blog.womenshealth.northwestern.edu/2010/08/male-menopause/
Wow, thank you for this very important article. I have reached this point.
I know that it was for pretty tough on my wife.
My sister-in-law was not having her menstrual period at her mid 30s. Probably because she was overweight. However, with the help of her OB, they were able to work it out and now, she has this wonderful baby. Took my sister 10years to have her first child.
nice information, good job! dont't forget to do some sport activities..