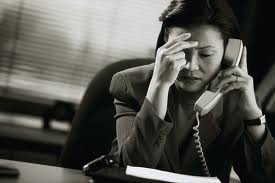 Women who report having high job strain have a 40 percent increased risk of cardiovascular disease, including heart attacks and the need for procedures to open blocked arteries, compared to those with low job strain, according to research presented at the American Heart Association's Scientific Sessions 2010.

In addition, job insecurity -- fear of losing one's job -- was associated with risk factors for cardiovascular disease such as high blood pressure, increased cholesterol and excess body weight. However, it's not directly associated with heart attacks, stroke, invasive heart procedures or cardiovascular death, researchers said.    Job strain, a form of psychological stress, is defined as having a demanding job, but little to no decision-making authority or opportunities to use one's creative or individual skills.

"Our study indicates that there are both immediate and long-term clinically documented cardiovascular health effects of job strain in women," said Michelle A. Albert, M.D., M.P.H., the study's senior author and associate physician at Brigham and Women's Hospital, Boston, Mass. "Your job can positively and negatively affect health, making it important to pay attention to the stresses of your job as part of your total health package."

Researchers analyzed job strain in 17,415 healthy women who participated in the landmark Women's Health Study. The women were primarily Caucasian health professionals, average age 57 who provided information about heart disease risk factors, job strain and job insecurity. They were followed for more than 10 years to track the development of cardiovascular disease. Researchers used a standard questionnaire to evaluate job strain and job insecurity with statements such as: "My job requires working very fast." "My job requires working very hard." "I am free from competing demands that others make."

"Women in jobs characterized by high demands and low control, as well as jobs with high demands but a high sense of control are at higher risk for heart disease long term," said Natalie Slopen, Sc.D., lead researcher and a postdoctoral research fellow at Harvard University Center on the Developing Child in Boston.

Previous research on the effects of job strain has focused on men and had a more restricted set of cardiovascular conditions. "From a public health perspective, it's crucial for employers, potential patients, as well as government and hospitals entities to monitor perceived employee job strain and initiate programs to alleviate job strain and perhaps positively impact prevention of heart disease," Albert said.

I know what its like to be a woman and be under the pump. Great post.
Stress is a life killer! At one of my recent positions I was so stressed out my chest would hurt when I got home from work. Thank goodness I found a new job, because I think that one was killing me.
Job stress is unavoidable in most cases. Instead of getting affected by it we can fight against it. We can improve our health by exercising daily and following a strict diet chart. This will lead to a stronger immune system and a healthy heart hence, avoiding major diseases.
Thanks for writing this, I was searching everywhere for this information. It’s really hard to find, had to leave a comment saying thanks so much!
Sometimes you just have to take some time out especially when it comes to the old ticker... increasing good heart foods &amp; anti stress exercise may be worth looking at as well.
Stress is silent killer. When you came to know about the problem, its too late so better to do some stress release exercise daily.
Stress can also lead to pain that's why being a woman, when stress attack, I tend to go for a break like having a body massage. This will ease and remove stresses due to workloads.
Thanks for sharing this blog according to me stress is silent killer and heavy job is the main reason of stress for women.
So don't take the job so seriously, sometimes you have to release your stress. Take a vacation.
I don't think it is just jobs that are stressful it is holding down a full time job and having to raise a family. It helps if you have a partner to share the load with and talk when you get home to relieve the stress.
this is really alarming, Women who report having high job strain have a 40 percent increased risk of cardiovascular disease. we should start to take care of our health.