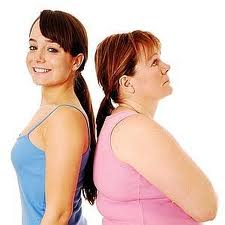 Why are some people obese while others are lean? Obese people must make poor eating choices, but could there be a physiological basis for those poor choices? A new study reveals that obese and lean people make decisions about short-term versus long-term rewards differently and have physical differences in their brains. Surprisingly, some of these behavioral and physical differences are found only in women.

An article recently published in the journal Frontiers in Human Neuroscience tested how lean and obese people relate to rewards using a simple card game. In this game, participants had to choose between two decks of cards. One deck provided large immediate rewards but overall losses in the long-term. This deck was meant to parallel the immediate reward of eating and the long-term negative effect of overeating on body weight. The other deck gave subjects smaller immediate rewards but was more advantageous in the long run. This deck represented healthier eating choices – less fulfilling immediately but more beneficial in the long term.

The researchers found that obese women choose immediate rewards more often than lean women. In fact, as the body mass index or BMI of the subjects increased, so did the number of times that they chose from the deck that provided large immediate rewards.

Additionally, as they played this card game over time lean women altered their choices and started to choose more cards from the deck that was advantageous in the long run. In contrast, obese women did not change their decision-making over time and continued to choose just as many cards from the deck that provided large immediate rewards but overall losses as the game progressed.

To investigate the possible basis of the behavioral differences between subjects, the brain structure of lean and obese men and women was examined using magnetic resonance imaging or MRI. Differences in brain structure between obese and lean people have been reported previously. This study found additional differences that were only present in obese versus lean women and not men.

Both the behavior and brain structure of the obese women observed in this study suggest that obese women might make poor eating choices because they are more sensitive to rewards and are driven more by habit-like behavior rather than goal-directed behavior. It is not known, however, if the alterations in brain structure in obese individuals are themselves the cause of obesity and overeating behaviors, or if the alterations are the effect of obesity-related behaviors.

The differences in behavior and brain structure between lean and obese women uncovered in this research could be important for the development of gender-specific treatments for obesity.

The distinction between the priorities of lean and obese women is astounding. The study suggests that obese women are less able to delay gratification than lean women. The focus on habitual behavior is also telling, somehow obese and lean women learn and process information differently, resulting in different attitudes about short term and long term rewards. There have been studies on social pressure and the effect of social relationships on weight gain and appearance. Women are more sensitive to the impressions of others, and the people with whom they closely associate might play a role in their food choices. In other words, if obese women spend a lot of time together and have come to view heaviness as normal body type and overeating as a normal behavior, they'll reinforce these attitudes. One good thing is that habits can change, people can modify their behavior through conscious deliberate effort. Healthy women can become unhealthy and obese women can become healthier. If obese women really want to become healthy, they'll find ways to improve their lifestyle, whether this be achieved individually or through a support network, if they want it bad enough they do what they need to do.
While I think there are genetic and gender differences in metabolisms, I don't think it should ultimately be an excuse. Eating less cures obesity 100% of the time.
Very interesting post. I have had a weight issue all my life, not a serious issue, but I have to really try to maintain my weight. My sibling, on the other hand has never had a weight issue and can practically eat anything on the menu with no weight gain at all. Its been really frustrating over the years but your article has definitely put things into perspective. Thanks for the great information.
Obesity is always been epidemics in America.I read your blog, and the information really hit home for me and my daughter.
Physiological vs. psychological factors weigh against true understanding to weight gain and losses. Thank you for this article.
We've just got to get onboard with relationship between overweight, longevity and disease.