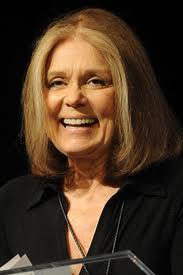 Last night I watched Gloria:  In Her Own Words -a  HBO documentary on feminist Gloria Steinem.    Young women today could learn to appreciate how far women have come in the last 50 years  by watching it.   Even I forgot how 'primitive'  life was for women in the 1960s.  We went to college but rarely maintained a career. Instead most women found a husband and stayed home, wore aprons and dresses, and cooked and cleaned.    Gloria Steinem came from a broken family, a father who was a dreamer, a mother who could never achieve her dreams (she was a writer) and was affected mentally as a result.   Gloria learned to tap dance in case she could find her way to fame on the stage!  Young Gloria learned early how to be a caretaker and despite all that was educated at Smith College and became a leader in the feminist movement of the 1960-70's and continues to support feminist causes in her elder years.    The documentary film revisited  the early days of the feminist movement.  Here are a few tidbits:

When Gloria moved to New York after college she could not rent an apartment under her own name.   She found a job but they only let her write about things like fashion and cooking.   The term women's liberation became the mantra and the word 'feminist' was not well defined.   Feminists were tagged homosexuals by conservative leaders like Phyllis Schafly.

She went undercover to go through the audition process to become a Playboy Bunny and, unexpectedly, actually made it all the way.  She wrote about her experience and how poorly the bunnies were treated.  Even then she was criticized by the male dominated media because she was so pretty.   How could someone so pretty be smart, too!   There was a comic written about her in a most derogatory way that even brought her to tears.  She was criticized for not being married (until she was in her late 60s).  The use of the  salutation "Ms." was not readily accepted and even mocked by highly visible political leaders.

She hooked up with feminist Bella Abzug of New York , an elected official, and became more political.  In fact, she admitted that Bella became her surrogate mother. They led the fight for abortion rights and got more women to run as political candidates. One third of the delegates to the 1972 Democratic convention were women due to the feminist movement!  Feminists tried to pass ERA (equal rights amendment)  so women could constitutionally  be defined as equal but it was never passed.  Instead, various laws were enacted that addressed individual issues as they were raised.   When she created Ms. Magazine respected media pundits like Harry Reasoner predicted it would only last 5 editions at most.   The magazine still exists today and there was a clip of Harry on the air apologizing!

I could go on but suggest you try to catch the film on HBO.   What are the issues women care about today?    We still don't earn as much as men do in many areas.   Leadership in academia, medicine and business is male dominated. ERA?   Some of the issues we fought for are being threatened by the conservative right.....often led by women.    Is it time for another movement?  Who is ready to lead the charge? Who is the next Gloria or Bella?

You are so right as to the changes in women's lifestyles over the past 50 years. I was born in the early 60's and my mother has never worked outside the home during my life and I am 49. She cooked every meal and cleaned every nook and cranny in the house. My brother and I were treated like royalty and she never complained. I, on the other hand have raised two daughters, one finished with college and the other in college. I have definitely raised my daughter's with the knowledge that they have the ability do do anything in life regardless of being a male or female. In my opinion the changes in women over the past half decade were way past due.
it always have been tradition stuff man and women. at my prospective i see, things are different now, man and woman have equal rights. not in all the countries. but Don't forget "BEHIND EVERY SUCCESSFUL MAN, THERE IS A WOMAN" and i believe without Women there is no Man value.
Your articles makes a lot of sense to me. I learn various from it. I wish you can write another excellent blogs next time.My heart is full of compliment to you.