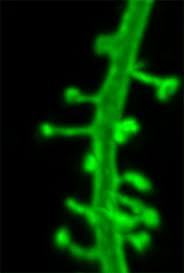 CHICAGO --- Estrogen is an elixir for the brain, sharpening mental performance in humans and animals and showing promise as a treatment for disorders of the brain such as Alzheimer’s disease and schizophrenia. But long-term estrogen therapy, once prescribed routinely for menopausal women, now is quite controversial because of research showing it increases the risk of cancer, heart disease and stroke.Northwestern Medicine researchers have discovered how to reap the benefits of estrogen without the risk. Using a special compound, they flipped a switch that mimics the effect of estrogen on cortical brain cells. The scientists also found how estrogen physically works in brain cells to boost mental performance, which had not been known.

When scientists flipped the switch, technically known as activating an estrogen receptor, they witnessed a dramatic increase in the number of connections between brains cells, or neurons. Those connections, called dendritic spines, are tiny bridges that enable the brain cells to talk to each other.

“We created more sites that could allow for more communication between the cells,” said lead investigator Deepak Srivastava, research assistant professor in neuroscience at Northwestern University Feinberg School of Medicine. “We are building more bridges so more information can go from one cell to another.”

Previous research has shown an increase in dendritic spines improves mental performance in animals. In humans, people who have Alzheimer’s disease or schizophrenia often have a decrease in these spines.

“We think there is a strong link between the number of dendritic spines and your mental performance,” Srivastava said. “A major theory is if you increase the number of spines, it could be a way to treat these significant mental illnesses. “

Northwestern scientists also found strong clues that estrogen can be produced in cortical brain cells. They identified aromatase, a critical protein needed to produce estrogen, to be in precisely the right spot in the brain cell to make more dendritic spines.

“We’ve found that the machinery needed to make estrogen in these brain cells is near the dendritic spines,” Srivastava said. “It’s exactly where it’s needed. There’s a lot of it in the right place at the right time. “

Next, Srivastava said, he wants to further identify the key molecules involved in the dendritic spine production and target them in the same way as the estrogen receptor in order to ultimately be able to treat schizophrenia and other mental disorders.

Nick Brandon, head of psychiatry at Pfizer Inc., whose group collaborated with the Penzes lab for this work, added, “We are very excited by the emerging data in this area. There is a great deal of literature and precedent for a role of estrogen and estrogen signaling in major mental illnesses. This adds to our understanding of the specific neuronal functions. As we understand the effects of these specific estrogen receptor beta compounds in preclinical models, we are discovering effects on specific neuronal functions, which could be relevant for the treatment of cognitive disorders, depression and schizophrenia. “

The advances of medical science are showing more and more that we are moving towards more and more solutions to ailments that trouble us. The breakthrough with estrogen helping with mental alertness is great . All medications tend to have side effects . Finding ways to reduce the side effects are vital. It is also imperative that we recognize the power of the mind in the healing process.
Northwestern Medicine researchers have discovered how to reap the benefits of estrogen without the risk. Using a special compound, they flipped a switch that mimics the effect of estrogen on cortical brain cells. The scientists also found how estrogen physically works in brain cells to boost mental performance